Henderson, NV -- (ReleaseWire) -- 11/20/2017 --Global Genesis Group is excited to announce the distribution of the award-winning documentary "Code 9: Officer Needs Assistance." The Code 9 Documentary unmasks the dangers First Responders face when dealing with stress and trauma on the job which often leads to cases of Post Traumatic Stress Disorder (PTSD).

Global Genesis Group is working with Dangerous Curves Productions to distribute the revolutionary documentary in both domestic and foreign markets. The film's unprecedented success in spreading awareness about mental health risks for First Responders has initiated training programs to combat these effects through the non profit organization, The Code 9 Project.

"Code 9: Officer Needs Assistance" takes a refreshingly honest and in-depth look at how the stress and trauma of police work can lead to PTSD and suicide. It is estimated that 18 to 20 percent of police officers and first responders are working the streets with undiagnosed and untreated PTSD, creating an issue that affects individual officers as well as the communities they serve. In light of recent political controversy creating tension between law enforcement and civilians, Code 9 promotes understanding by shedding light on issues that transcend the badge.

In 2015, Arizona public safety executives were invited to attend a premiere of "Code 9: Officer Needs Assistance." The documentary was met with high attendance and supportive feedback. "When the support was well received, we moved forward and offered, for the first time ever the documentary premiere and workshops to first line public safety personnel," said Mesa Chief of Police John Meza. 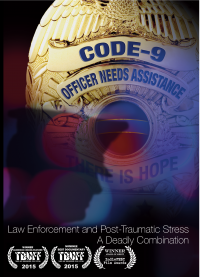