Group for the East End Raises over $570,000 to Protect East End Environment

Richard Kind, Tom Colicchio, Ryan Serhant were just a few notable guests who came out to support the Group

During the cocktail hour, guests sipped specialty drinks and an assortment of delectable wines from nearby Wölffer Estate Vineyard. Watching the spectacular sunset from one of the highest points on the East End, attendees noshed on hors d'oeuvres and were entertained by internationally renowned DJ Sam French and classical violinist Delaney Harter.

Once the sun went down, Bob DeLuca, president of Group for the East End, pointed to Peconic Bay in the distance and spoke of the urgency to act on—and not just talk about—implementing viable solutions to clean up and protect local waters, before an entire collapse of eastern Long Island's marine environment. Then the exciting live auction kicked into gear with Richard Kind at the helm. Raising over $120,000, items such as a fishing trip with celebrity chef Kerry Heffernan, and tickets to Broadway's hottest show, Hamilton, were purchased by lucky Group supporters. After the auction, guests were treated to an extraordinary dinner prepared by The Bridge, and then DJ Sam French took the stage again to spin his irresistible tunes as everyone danced the night away under the stars.

About Group for the East End
Since 1972, Group for the East End has served as eastern Long Island's full-time professional advocate for conservation. The Group is widely recognized and respected for its work to protect the East End environment by advancing realistic solutions to complex problems, mobilizing informed citizens, educating the next generation of leaders, and challenging irresponsible development that impacts quality of life and community character.

For more information on Swing into Summer at the Bridge or Group for the East End, visit: GroupfortheEastEnd.org

Group for the East End - Logo 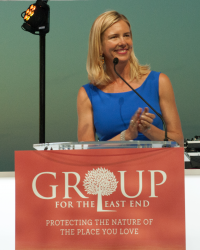 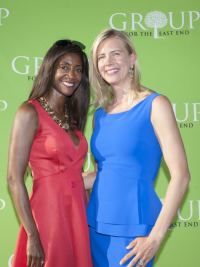