Atlanta, GA -- (ReleaseWire) -- 10/23/2019 --Guitar Girl Magazine is pleased to announce that it has made its way into the final list of contenders for the prestigious 2019 Folio: Eddie & Ozzie Awards. The magazine will compete for the ultimate honor in the category of Design, New Magazine.

Known in the publishing industry as the most inclusive awards program, The Eddie & Ozzie Awards bring out those pursuing excellence in editorial and design and setting up new benchmarks.

"I'm so honored to have Guitar Girl Magazine selected as a finalist for the Eddie & Ozzie Awards. Our team of designers, contributors, and staff have worked so diligently to transform our dreams at GGM into reality. Together we are a team with the aspiration of seeing women in music soar!" said Tara Low of Guitar Girl Magazine.

Guitar Girl Magazine was selected from over 2,000 entries received this year for various awards, which was narrowed to about 1,100 finalists. The reviews were conducted by a prestigious panel of over 200 judges. The awards are held for all aspects of the publishing industry by the Folio: team.

Those winning the awards this year will represent the pillars of the magazine and digital publishing and will be honored for outstanding journalism, photography, content, design, and more.

About Guitar Girl Magazine
Guitar Girl Magazine is the most trusted, relevant, and inspiring female magazine on the market today focused on encouraging, inspiring, and empowering female musicians. Founded by Tara Low in 2012 to create a community for female players, she has assembled a great team of knowledgeable journalists with over 50+ years in the music industry. The magazine regularly provides updates on women in the music industry, interviews female musicians, reviews guitar gear, gives insider tips and advice, and highlights special features and fun rock lifestyle discoveries. 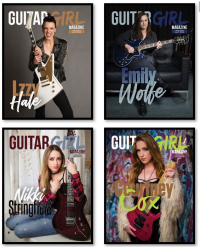