Santa Monica, CA -- (ReleaseWire) -- 03/21/2017 --Hanson Robotics, the creator of the world's most humanlike and expressive robots, is now crowdfunding their first consumer robot on Indiegogo InDemand at http://bit.ly/2neTplj after raising well over $100,000 from a just concluded crowdfunding campaign on Kickstarter.

Professor Einstein is a playful robot who unlocks the personal genius in you. He connects to the cloud and interacts dynamically with an iPad or Android tablet to talk with you, share his passion for science, challenge you with brain games, and take you on a journey of fun and learning.

Professor Einstein was first unveiled at the Consumer Electronics Show in Las Vegas this year, garnering substantial media accolades. Touted as "the coolest tech you can see," and "a breakout star of the convention," Professor Einstein became one of the stars of the show.

Some of the most interesting characteristic features of Professor Einstein are

- Expressions and gestures: Looks like the real Einstein and frowns, smiles, and even sticks out his tongue

- Brain-teasing fun: Can play interactive games on iPad and Android tablet for hours, and teach science and math

- Rechargeable: Offers up to three hours of interactive fun for every recharge

Professor Einstein is result of a groundbreaking collaboration between Hanson Robotics and Hebrew University of Jerusalem along with their licensing agency, Greenlight.

To get your own Professor Einstein at a special price on Indiegogo, please visit http://bit.ly/2neTplj

About Hanson Robotics
Hanson Robotics develops the world's most humanlike robots, endowed with remarkable expressiveness, aesthetics and interactivity. The Company and its founder, Dr. David Hanson, has built a worldwide reputation for creating robots that look and act genuinely alive, and produced many renowned robots that have received massive media and public acclaim. 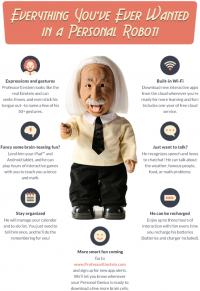