H.E. Tsem Tulku Rinpoche Reaffirms His Call for Tibetans to Desist from Self-Immolation as a Form of Protest

In reply to three recent reports about Tibetan's self-immolations and following fervent praising in social media, His Eminence Tsem Tulku Rinpoche has issued a strong appeal requesting Tibetans to stop the acts of self-immolation to avoid being exploited for political interests.

Kuala Lumpur, Malaysia -- (ReleaseWire) -- 03/12/2018 --Buddhism's spiritual and political leaders should focus on a message of peace and reconciliation rather than seeking to exploit violent self-immolation acts of protest for political gains, says His Eminence the 25th Tsem Tulku Rinpoche, a reincarnated high lama of the Gelug school of Tibetan Buddhism.

In response to two recent news reports of Tibetan monks threatening self-immolation and one of a Tibetan citizen who set himself ablaze, Tsem Rinpoche, the spiritual advisor of Kechara Buddhist Organisation, issued a powerful statement calling for Tibetans to end the act of sacrificing their lives in protest and to employ non-harmful, peaceful actions instead.

Recent news reports concerning the matter included: 'Monk Proposes Self Immolation Over Politics in Tibetan Exile' published on February 24 by the online portal Tibetan Journal; 'Utsang monk warrior warns president Sangay of self-immolation', which appeared on March 5 in The Tibet Star; and Tibetan Dies in Self-immolation in Sichuan's Ngaba County, which appeared on March 7 in Radio Free Asia.

The two monks, both Tibetan refugees, and most recently a Tibetan man living in his home country, are the latest to threaten or use this drastic measure. The first two were seeking to highlight abuses of political power within the Central Tibetan Administration (CTA) of exiled Tibetans in India, while the last was apparently protesting Chinese rule and policies in Tibet.

Since 2009, 152 Tibetans have set themselves on fire in protest, including 41 monks and eight nuns. They believed their actions would empower others and draw public support for their chosen cause, and many have since been lauded for their sacrifice and even celebrated as heroes, observed His Eminence the 25th Tsem Tulku Rinpoche.

"However, the act of setting oneself ablaze is not one that should be glorified, politicised or encouraged as a means to accomplishing personal or political agendas," he said.

He noted that despite the large number of Tibetans who had already chosen this dramatic method of dissent, these actions had provoked little change. "Has it become too commonplace or are Tibetan lives so insignificant that we choose to ignore them?" he asked. "Either way, self-immolation as an act of protest has clearly failed, and it is time for Tibetans to look for other ways to be seen and heard."

His comments, first released on March 8, shortly before the 59th anniversary of Tibetan upraise against China's, were widely attacked on social media in what appeared to be a co-ordinated wave of posts and tweets. The attacks are strangely from anonymous accounts that have worked incessantly to split the Tibetan community via a number of fronts including the Shugden conflict.

Very few of Tibet's spiritual leaders or human rights exponents from the west have firmly spoken out against the use of self-immolation as a propaganda tool.

Rejecting violence in all its forms, H.E. Tsem Tulku Rinpoche noted that there are many other options for creating peaceful protest movements that are democratic, empowering and dynamic. A truly Buddhist path will lift the human spirit beyond suffering, while the Buddha's teachings on the preciousness of human life should encourage people to use their limited time on earth to seek more positive ways to create the change they want, he said. Tibetans can employ the Buddha's teachings, through wisdom, compassion and expertise, to heal and unite the Tibetan people, thus creating the spiritual basis for social and economic progress, both personal and collective, he added.

H.E. Tsem Tulku Rinpoche called on the Central Tibetan Administration (CTA) and other heads of government to open their hearts to the Tibetan people's plight and to work towards finding peaceful and non-violent solutions that could bring mutual benefit for everyone.

He urged the Tibetan leadership to take measures to prevent self-immolations — both by communicating through the modern media and by sending representatives to Tibetan refugee camps throughout India, providing information to Tibet and speaking out clearly and firmly against the practice.

"I am a simple monk bound by vows of compassion and I cannot watch idly as precious lives come to a senseless end," H.E. Tsem Tulku Rinpoche said. "I am making this request out of genuine concern and I ask everyone who reads this not to colour it with political or other interpretations."

About Kechara
The Kechara Buddhist Organisation was founded by H.E. Tsem Tulku Rinpoche, who practices the ancient wisdom of Buddha's authentic teachings. His Eminence the 25th Tsem Tulku Rinpoche, the spiritual advisor of Kechara, is known for his community-driven work in Malaysia, India and Nepal. He draws inspiration from his difficult life experiences to conceptualise charitable projects that have, amongst other things, furnished schools and hospitals for the poor in India, helped disaster victims in Nepal and fed thousands of homeless people and the urban poor in Malaysia. 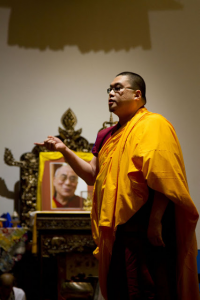