New HGH Testing in Sports and the Best Alternatives

The NFL and NBA are the latest sports to make headlines about HGH testing and HGH problems in their sport. What's the safe alternative to HGH? Is there one?

Boonton, NJ -- (ReleaseWire) -- 03/06/2013 --So everyone's talking about it and it's still getting a lot of press - HGH. Human Growth Hormone (HGH) is a synthetic prescription drug that increases your HGH levels by injection. For many years, the professional sporting world from cycling to the NFL have been rippled with accusing athletes and affirming their use of HGH.

18 months ago, the NFL Players Association and the league agreed to introduce human growth hormone testing to the game. It's no secret that certain players want a clean and level playing field. According to NFL.com, London Fletcher is one of the latest players to voice his opinion and say "I want a clean game. I want to compete against guys that are doing it the right way".

But what is the right way? Certainly, players should be able to take a vitamin that is legal and over the counter? Are daily vitamins out of the question? What about caffeine, energy drinks, bodybuilding supplements, etc... The list can go on forever. Where is the line drawn? Dan Smith from HGH.com states "We have several products that are legal in sports. We don't sell injectable HGH, we sell good HGH alternatives that are meant to give people similar results, without the prescription, the injection, or the pain (and for a fraction of the cost). A level playing field in sports refers to many supplements and illegal drugs. Look to HGH.com to offer good alternatives for you. The saying is there's a million ways to skin a cat - well, there's other ways to achieve good performance and muscle gains legally and safely."

While each sport has their own rules on what's legal and not legal in sports, athletes can always look to WADA (http://www.wada-ama.org) as well to get a good idea of what will cause them to fail a PED test.

According to the same article on NFL.com, London Fletcher seems to think at least 10% of players in the NFL use HGH. HGH.com said that "HGH happens to be an incredible drug when used appropriately. It can change peoples and even childrens lives around for the better. However, it's a controlled substance for a reason and should not be used for performance enhancement. That's where we come in and provide safe alternatives that can help you achieve similar goals safely.".

For more info on HGH and HGH Supplements, visit http://www.hgh.com. 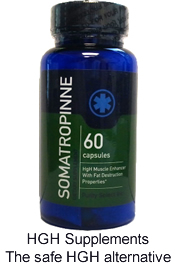