New York, NY -- (ReleaseWire) -- 08/15/2014 --On the heels of the successful return of the Hip Hop Hall of Fame Awards Show in May, Chairman JT Thompson announces that the Hip Hop Hall of Fame has teamed up with Harlem Week to produce the first annual Harlem Hip Hop Festival. The Festival will include three events featuring the McDonald’s B-Boy Royale Dance Competition at NYU on August 16th, the Harlem Hip Hop Fest main event at 135th & St Nicholas on Saturday August 23rd, and the annual Graffiti Hall of Fame taking place at 106th & Park on August 30th.

The Festival is billed as a Celebration of Music, Arts, Culture, and Peace Honoring the 50th Anniversary of the Civil Rights Movement. The Saturday August 23rd Harlem Week Stage event following the 5k Walk/Run will be hosted by Harlem’s own Crash Crew Member DJ Lord Yoda X and Beatstreet Movies Us Girls MC Debbie D with DJ Mell Starr, Boogie Blind, and DJ WildStyle on the music turntables.

There will be special performances, with Spoonie G, MC Eniquiety, Reggie Reg, Harlem’s B.U.R.N. U MC’s, Black UN, and Miranda Rights. Also exhibitions by Easy AD on Hip Hop Health from Harlem Hospital, Dr. Shaka on Martial Arts, Drill Team by the Jr. FOI, and other Kids themed fun shows by Puppeteer Wayne and Charlie, and Hip Hop Catz Characters with graffiti artist and painters interactions with youth, and families. ‘We are looking forward to being involved with Harlem Week, as our focus has always been on serving the youth and the community’, stated DJ Lord Yoda X a Committee Co-Chair of the Hip Hop Hall of Fame.

The Harlem Annex & Education Center will serve as official offices, and visitors bureau until the Hip Hop Hall of Fame Museum construction is completed in Midtown Manhattan adjacent to Time Square in 2016. The Harlem Annex & Education Center will be a permanent base of operations for many community events, education initiatives, and outreach activities. ‘It is all about the youth and giving them a safer place to play, live, and be educated’, stated Easy AD of the Legendary Cold Crush Brothers a Committee Co-Chair of the Hip Hop Hall of Fame. 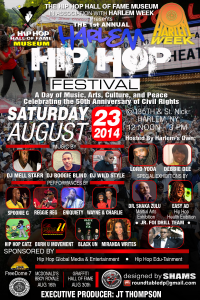