Queens, NY -- (ReleaseWire) -- 03/06/2014 --Legendary in every way Overdrive Productions and Resorts World Casino New York have linked arms to bring the first in a series of hip hop concerts to Queens, New York. With an all-star lineup of legendary talent to the tune of Naughty By Nature, Kurtis Blow, DJ Kool, Black Sheep, DJ Marley Marl and DJ Skribble the “Legends of Hip Hop Concert Volume 1” is the first of its kind ever in the borough of Queens. Described as “one for the books” tickets are on sale now for the record breaking March 15th event.

Jared Overeem, CEO of Overdrive Productions said, “The Legends of Hip Hop Concert has already set records with our talented line up. These influential hip hop artists have basically defined this music genre. In its history Queens has never seen an event like this before.”

The show will highlight the Grammy Award-winning Naughty By Nature who hail from East Orange, New Jersey. It will also include Queens hometown duo Black Sheep who debuted in 1991 with the hit song “Flavor of the Month.” History making Kurtis Blow will also appear to thrill crowds with his single “The Breaks” from his 1980 debut album. Blow was the first rapper to sign with a major record label and had the first rap song with a certified gold record.

DJ Kool joins the legends with is hip hop anthem “Let Me Clear My Throat” from his 1996 release as well as other renowned tunes. The show will also include hip hop producer DJ Marley Marl. Marley Marl was the house producer of the Juice Crew in the golden age of hip hop with Big Daddy Kane, Biz Markie, Roxanne Shanté, Kool G Rap & DJ Polo, Craig G, MC Shan and Masta Ace. Rounding out the legendary acts is DJ Skribble. Since 1980 DJ Skribble has revolutionized the music industry with his own persona and by launching countless musicians on the scene. Skribble has worked on MTV's The Grind, Total Request Live, Spring Break, Hip Hop Night and the Millennium Special Live. DJ Skribble was the first "Celebrity DJ" and one of the first DJ's to have his face associated with his name.

About Overdrive Productions
Overdrive Productions was formed in 2006 by CEO Jared Overeem. Overeem is an entrepreneur that specializes in talent management as well as concert promotion. His partnership with Resorts World Casino New York will produce the Legends of Hip Hop Concert Volume 1 on March 15. The event, the first in a series, will be the first of its kind in Queens, New York. 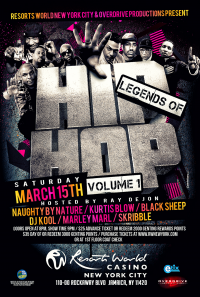