Atlanta, GA -- (ReleaseWire) -- 03/12/2021 --One week after the new single 'Happy And You Know It' was released there has been some interesting news circulating around suggesting this particular song has literally been a life saver. Yes, fortunately you've read that correctly.

A Dallas Texas woman who preferred to remain anonymous stated that there has been a lot of tension in her home from the snow storm to the pandemic. She and her family experienced eight days of no power during the recent outage. Once power was restored and her family seemed to be getting back on their feet, she stated that this past weekend her husband insisted on attending an all star weekend party at a local club with his friends.

"I am not proud of my thoughts lately about my husband but I am so thankful I came across that song when I did because if that hadn't happened, the outcome would have been much different. It was like a gift from heaven. I needed it at that very moment."

You may be asking yourself what was so wrong with attending the party. She revealed her husband contracted COVID-19 and brought it home to her and their teenage son. They are currently in quarantine. Her husband stated that he believes he contracted the virus when he removed his mask for a photo op with his friends. He also admitted to removing his mask to innocently kiss the waitress who brought him an endless amount of ketchup for his onion rings.

"The level of anger that I went through in those moments after getting positive result were almost unbearable but thank God I came across that song because it literally saved a life."

We reached out to the Hip Hop star Deveondi to inform him of this breath taking news. To our surprise he said he is not totally shocked. "Just two days after the song was released someone wrote a comment on one of my social media pages saying "This is strong medicine. I think this song just prevented me from snapping on some poor fool". Anyone that is familiar with the term snapped knows that is not a term of endearment. I am happy this song is making such a major impact around the world and in so many households."

There are some occasions where we are blessed to hear music that is both great and impactful and this is one of those songs. After listening to 'Happy And You Know It', I can admit I also felt my own energy shifted and it helped put me in a better mood. 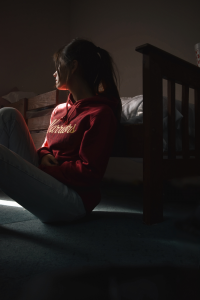