Austin, TX -- (ReleaseWire) -- 10/12/2016 --Holovect Industries, designers of the first commercially available desktop "holographic" display device, have announced a Kickstarter campaign to crowdfund its production. The 3D display system utilizes laser light to draw and display vector-based images in the air in front of the unit. A variety of Kickstarter rewards are available for backers, including early bird specials with significant discounts on the unit price.

The Holovect Mk II uses a volumetric display system powered by laser light to produce a 3D image of objects within a self-contained area. A hologram simply refers to a recording of 3D patterns and information about an object. The Holovect Mk II takes this concept one step further with volumetric vector-based images using this 3D data. These images are projected onto modified air to create three dimensional representations which are free-floating in front of the device.

The technology behind this display works through manipulation of light within the air. Light will reflect and bend as it passes between areas with different refractive indices (RI). Specific circumstances within the air itself may affect how light appears or is bent. The Holovect Mk II has developed a system to control the air within its display area. The control allows adjustment of the refractive index to specifically reflect laser light. This allows a laser to draw vector-based 3D images directly in this controlled air box.

The rendering of these three dimensional objects provides a wide range of benefits to designers, engineers, artists, and more. The Holovect Mk II can take a stereolithography (STL) model and convert it into a displayable wireframe vector image prior to 3D printing. The Holovect can also take a direct STL visualization to view a model in its layers. This pre-visualization is particularly helpful for assessing and inspecting products to identify potential problems or to revise and improve the overall structure prior to 3D printing. This can save designers a considerable amount of time and resources by inspecting a Holovect projection of an STL model prior to committing to printing it.

The Kickstarter campaign will utilize crowdfunding support for initial production of the Holovect Mk II units. Backers can enjoy significant discounts on the price of the unit by claiming early bird pledges which are only available in limited numbers. Additional rewards are available for backers to ensure they receive their Holovects during this first production run.

Prospective backers are encouraged to visit the Holovect Mk II Kickstarter page as early as possible to secure their units. 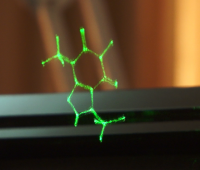