The 2nd season screened to a sold out crowd in Atlanta in 2015. "We were looking for a way to increase our exposure and bring the films to more people" says creator Ricky Hess. "There are more opportunities for distribution with a feature film so we decided to combine our new episodes into an anthology feature".

Horror Hotel The Movie contains a collection of 6 new intriguing tales that includes aliens, clones, psychos, brain swapping, and a futuristic world without men. All laced with humor and devoid of vulgarity or graphic horror. If you are looking for a splatter film, look elsewhere.

Horror Hotel is a family run production with creator Ricky Hess working side by side with mom, Debbie Hess/Producer and dad, Al Hess/writer. All the cast and crew hail from the Atlanta and surrounding area. "We are very proud of the tremendous talent that has contributed to our productions from the large pool of professional film folks that call Atlanta home" says Ricky. "Our goal has always been to give them a platform with successful distribution to showcase their abilities and something to be proud of."

Horror Hotel is currently in production on a new 3rd season. 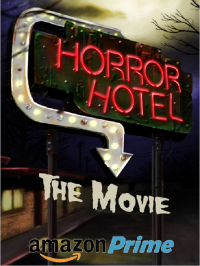