Add Height launches a revolutionary product that is changing the industry of height insoles and shoe lifts altogether. The Add Height insole an all-new, exceptionally designed height insole that will deliver height, comfort, support and stability!

Toronto, ON -- (ReleaseWire) -- 07/11/2016 --It may seem like a tall tale, but every word of it is true. In 2016, Cody Schindermann was inspired by insecurities about his height to launch Add HeightTM, patent pending, which is a new height insole product that could transform the lives of countless people around the globe.

It all began several years ago when Cody, who is 5 feet 7 inches tall, was dating his first girlfriend, who was several inches taller than him. The height difference didn't seem to bother her, but Cody had an issue with it. "I was always struggling with it," he explains. "I wanted to feel adequate and equal the person I was dating. Call it pride or ego but I just couldn't accept it."

So, Cody decided to take matters into his own hands. He began by inserting business cards into his shoes. It achieved the desired goal; he gained confidence and self-assurance along with the additional height, but it was terribly painful.

His insecurities and self-doubt were not unjustified. Discrimination about height (known as heightism) is ingrained in the North-American culture. It is even part of our everyday vernacular. A common expression of admiration is to "look up to someone." Surveys have indicated that that 90% of CEOs are above average height while only 3% are 5'7" or under.[1]

Cody began to search for an insole that could be inserted into his shoe that would increase height, without the discomfort. He found several kinds of height insoles and shoe lifts, mostly originating from China, but none of them were sufficient.

"I have tried every height insole and shoe lift out there and sprained my ankle or bruised my heels because of their poor quality. Everything on the market has just been rebranded over and over, no one has actually taken the time to create something that could actually provide height, yet feel comfortable and easy to wear on a daily basis. Wearing the poor quality shoe lifts out there really made me understand the pain that women endure because of heels," he said.

Recognizing there was a void in the marketplace for a high quality shoe lift, Cody seized the opportunity by creating a solution that would not only add height, but also provide support, comfort, and stability. With a prototype he built in his garage, he traveled to the only place he knew manufacturers of height insoles were located: Mainland China.

Following several meetings and countless prototypes, he soon received the final sample of the shoe lift he would call Add HeightTM.

Currently only available for purchase online at AddHeight, Add HeightTM has already experienced incredible success, generating orders from across the globe. 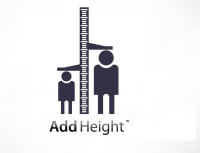