London, UK -- (ReleaseWire) -- 06/18/2020 --Cryptocurrency continues to drive innovation around the world, and not least in sport. The value and availability of these coins is set not by banks and financial institutions but by the computational power required to create it and allows people to make secure and anonymous transactions online, using block-chain technology to record every transaction.

But in the world of sport, cryptocurrency is being used to create virtual communities with greater interaction between fans and teams. Sites like Socio allow supporters to purchase tokens for their favourite teams in basketball or football, and this gives them privileged access to everything from special memorabilia, both physical and virtual, to votes on the colours of a newly released team jersey.

When Power Snooker, a more aggressive and dynamic sister sport to traditional Snooker, was created in 2010 its reach was world wide, with millions tuning in to watch the finals in 2010 and 2011 from 193 countries. Costas A Joannou, now the Chairman of Power Snooker Group explained that "For a global sport, we need a global cryptocurrency, so we created PowerSnookerCoin to do just that."

"Amongst many reasons for Power Snooker's initial failure to continue was the lack of structure supporting the community," Costas A Joannou said, "there was a failure to innovate and move with the times."

This global cryptocurrency is more ambitious than similar models adopted in other sports. For fans, purchasing PowerSnookerCoins can offer exclusive access to news, community votes and merchandise, and depending on the tier of membership purchased, access to future clubs, events and tournaments.

The group plans to put the capital raised from the PowerSnookerCoin back into the sport, it's professional and amateur leagues. "When you buy a PowerSnookerCoin you aren't just buying a medium of exchange," Costas A Joannou said, "You are also buying support emanating from the Group's tangible and intangible assets." 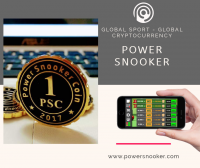