How This KICKSTARTER Is Making Normal People Magicians

Magic has always had a special ring to it. Who does not want to do the impossible? To help normal people (of any skill level) perform David Blaine's street magic, is the Ellusionist How To Be A Magician kit.

San Rafael, CA -- (ReleaseWire) -- 11/08/2016 --Magic is an amazing medium in which performers adapt their own artistic style and use it to wow onlookers. Today a new brand of magic is taking over. No longer is it bunnies and top hats, but coins, rubber bands, pens, cards and other typical object. This brand of magic is the phenomenon known as street magic. And while many people want to pick up street magic for its social benefits or simply the desire to make a stranger smile, magic can seem like an exclusive inner circle open only to those with lightning fast hands. This is a common misconception that Ellusionist is here to disprove. The company has trained over a million novice magicians, so nothing truly holds to common man back from magic. The How To Be A Magician kit by Ellusionist proves just that. By constructing a digestible guide alongside any needed props, anyone can bewilder an audience.

There are a variety of benefits to picking up a few skills in this field. Kids who perform magic often find it confidence building. Parents who perform magic become the center of attention and surrounded by mystery in the eyes of their children. And everyone can find a bit of passion in adapting and creating their own tricks. But worry not, for the How To Be A Magician kit comes prepacked with thirty-eight tricks in the tier one package including teleportation, disappearance, and mind reading tricks. In the tier two package, students are taught nine additional tricks that coincide with a set of professional props provided. As a side benefit, the kit is designed to do more than just perform, but teach. To achieve this goal, the kit starts students off on easy-to-perform tricks and slowly scales up, giving clients a true sense of mastery and teaching some the same tricks used by David Blaine. To garner funds for the kits, the Ellusionist team launched a Kickstarter campaign, which was funded in just one day. To pre-order visit the campaign page, and as a Kickstarter campaign there are a variety of other rewards. These rewards range from a thank you to a delivered-to-you live performance.

About Ellusionist
Ellusionist is the same company that launched the Pyro Mini Fireshooter that went viral last holiday season and was founded by Brad Christian, a lifelong magician. He was inspired to become a magician at the young age of six when he was presented with a novice magician kit. Unfortunately, the kit had its flaws and only allowed Brad to perform mediocre magic, so Brad had to work hard to come back into the world of magic. Today Brad is happy to be helping other budding magicians with a real magic kit that will save users from the embarrassment of a trinket-based low-quality kit.

To learn more or support the How To Be A Magician kit visit the Kickstarter campaign page. 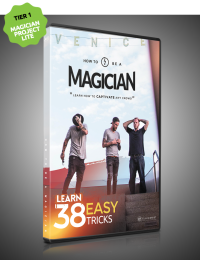 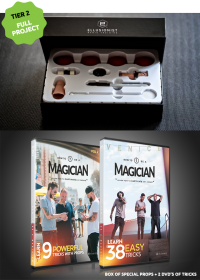