Alpharetta, GA -- (ReleaseWire) -- 02/26/2020 --Father and widower William G. Shackelford releases his parenting book, titled Growing Into Your Parenting Role: Tips and Tools for Every Stage of Your Parenting Journey, to honor his late wife.

William and his late wife, Renée, were high school sweethearts who were married for forty-three years and raised three children together. They found that their friends were constantly commenting on their parenting style and asking for advice. They finally decided they needed to document their parenting style so it could be preserved and passed on and wrote the outline of what would become Growing Into Your Parenting Role.

After Renée lost her battle with cancer, William rediscovered the outline they had written together and realized finishing the book could be his way of honoring her memory.

William believes what makes Growing Into Your Parenting Role stand out from other parenting books is that it takes the unique approach that begins with the parents themselves. "From our experience as parents, we knew the first step in being great parents is to enter parenthood with a keen sense of self," says William. "We learned that who you are—your personality, behavioral style, sense of self—greatly influences the type of parent you can be now or later."

He also wrote this book with the intention of filling the gap that he feels has been created by the declining involvement of grandparents in raising children. "In previous generations, we relied on the grandparents to help us raise our kids and to model good parenting," says William. "Today, in our highly mobile society, grandparents are more likely to live too far away to be a steady influence in the lives of their grandchildren."

William hopes the techniques learned in his book will be a launching pad for readers becoming great parents. In collaboration with the National Parenting Project, William is planning to conduct presentations, workshops, seminars, and retreats based on the parenting strategies and techniques presented in Growing Into Your Parenting Role.

Growing Into Your Parenting Role: Tips and Tools for Every Stage of Your Parenting Journey is available on growing-into-your-parenting-role.com, Amazon.com, Apple iBooks, Shop.BookLogix.com, and BarnesandNoble.com.

Note to Media: William Shackelford is available for media interviews. To schedule an interview, please email marketing@booklogix.com or call 470-239-8547. 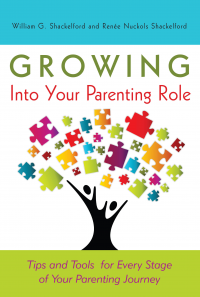