Durham, NC -- (ReleaseWire) -- 04/19/2018 --Today, Moogfest unveils the full schedule for its 2018 festival, including artist-led workshops and conversations, film screenings, the addition of IBM Watson Creative Director Jennifer Sukis to its keynote program, and the premiere of a traveling exhibit from artist Ralph Steadman featuring many never-before-seen works.

Keynote speaker Jennifer Sukis's journey as a visual creative has progressed from branding to interfaces, and then apps to A.I. So, too, has her vision for how advancements in computing technology can solve long-standing problems in user design and experience. Her keynote will touch on how A.I. will influence human shifts into new creative frontiers and how we're already tapping into the limitless creative applications waiting therein for mass usage.

As a companion to her keynote, IBM Watson Design Lead Maya C Weinstein will lead two workshops on enhancing design applications through cognitive technology. Participants will work directly with A.I. modules currently being used to inspire art and music at the highest levels, and use design thinking to conceptualize and collaborate on a specific project. No prior experience is necessary for participation.

The full schedule revealed today also includes over 200 workshops, masterclasses, and conversations along with this year's film programming, among which are "Bight of the Twin," Genesis P-Orridge's exploration of the origins of voodoo in Benin; the Bedroom Community tour film "Everything Everywhere All the Time"; Gavin Rayna Russom's experimental short, "No More White Presidents"; the Armen Ra biopic "When My Sorrow Died"; and more. All films will be accompanied by an artist conversation directly following the screening. The Moogfest 2018 local programming announcement also accompanies the schedule release. Durham collective and record label Raund Haus, along with dance music curators The Floor have assembled a full slate of performances from local producers and DJs, plus one very special guest to be revealed at the festival.

Additionally, Moogfest and United Therapeutics are excited to welcome the Ralph Steadman Art Collection's exhibition of a selection of the renowned artist's original works, Harmon-INK!, which will live within the annual Moog pop-up. Included in this exhibition are drawings and sketches from the filming of "Where the Buffalo Roam" and originals from the never-before-published Rumble in the Jungle series, companion pieces to Hunter S. Thompson's ill-fated account of the epic clash between Mohamed Ali and George Foreman in Kinasha in 1974. One piece in particular was considered lost until it was discovered in the effects of Norman Scott this year and returned to the collection in time to be displayed for the first time ever at Moogfest 2018. To accompany the exhibit, Moogfest will be screening "For No Good Reason," a documentary about Steadman introduced by the artist himself via Skype.

Harmon-INK! is made possible from the generous support of United Therapeutics, who are key sponsors of the Ralph Steadman Retrospective, scheduled to begin touring the U.S. this June.

Today's reveal of the full schedule marks the announcement of the workshop sign-up schedule. As in previous years, the sign-up process will be determined by ticket type, broken down in detail below:

- Engineer and VIP pass holders: Workshop sign-up begins this Friday, April 20 at 11 a.m. (ET) and ends April 23 at 11:59 p.m. (ET). Each pass holder will be able to reserve their spot in two workshops during this period.

- GA, Student, and Durham Local pass holders: Workshop sign-up begins Tuesday, April 24 at 11 a.m. (ET) and ends Thursday, April 26 at 11:59 p.m. (ET). Each pass holder will be able to reserve their spot in two workshops during this period.

Starting Friday, April 27 at 11 a.m. (ET) onward, all ticket types can sign up for an unlimited number of workshops. Some workshops will reach capacity faster than others. 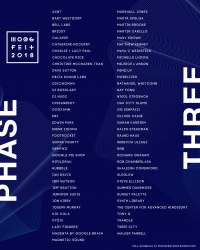