"I began National Invisible Chronic Illness Awareness Week in 2002, because I saw so many people who actually suffered more from feeling their pain was not validated than sometimes from the physical pain itself. I was honored to participate in and support this event."

Jennifer Pettit organized the event. As founder of "Understanding Invisible Illnesses" she was contacted by her alma mater, Villanova University, who was eager to create an event that focused on a patient's experience of how one's body image can be impacted by a chronic illness, even when the illness is invisible to most people. The event was also incorporated with a project senior nursing students were doing about chronic illness and body image.

- a panel presentation with question and answers, including a variety of illnesses such as Asperger's syndrome, Sjogren's Syndrome, Localized Scleroderma, Dysautonomia, Fibromyalgia, Osteoarthritis, Raynaud's Phenomena, Fibromatosis (a chronic cancer), and Cerebral Palsy, representing both men and women

- a display of photographs of people living with chronic illness, before and after, called "Invisible Illnesses Made Visible"

Copen participated by sending in some photographs of her left hand in an Outrigger splint following the replacement of four finger joints in 2009. Pettit says, "Having Lisa as an ally is a powerful tool! When she put out the message encouraging others to participate, hits on my blog skyrocketed and emails began rolling in. While any display would have been a step forward, we wouldn't have had anything near the impact we did without Lisa's stamp of approval."

Pettit is currently pursuing the opportunity to take the event to more colleges, as well as have a permanent photography display. For more information about Pettit's project and future events visit her web site at http://www.myuiiblog.blogspot.com .

National Invisible Chronic Illness Awareness Week, sponsored by Rest Ministries, will be held September 12-18, 2011. Sign up for updates for this event and online conference at http://invisibleillnessweek.com.

"It's exciting to see the awareness of invisible illness increase each year," says Copen. "When I started becoming an advocate for this purpose there were few people involved and even today, events 'offline' are rare. Various studies have reported that physical illness or uncontrollable physical pain are major factors in up to 70% of suicides (1) and more than 50% of these suicidal patients were under 35 years of age (2). By partnering with people like Jennifer Pettit we are able to increase the awareness, and ultimately bring more hope to those battling invisible disabilities each day."

Find out more about Rest Ministries and how to connect with others for support at http://RestMinistries.com 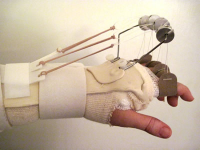