Games today span across many genres, ranging from shooters to RPGs. Here to let users create their own genres and build on existing ones is a new gaming platform named MyWorld.

San Francisco, CA -- (ReleaseWire) -- 01/02/2017 --Games in the last few decades have truly taken off. Hundreds of thousands of players are enthralled by video games every day. What's more is the sheer diversity of games that have been created and popularized. A player can play almost anything. Everything from racing games to sandbox modes to tycoon simulators are available to play, but to the hungry and imaginative mind of a gamer this finite variety is not enough. A gamer is not satisfied with the sky as the limit, they want a truly limitless experience, and MyWorld is here to provide just that. Through MyWorld, anyone can build anything they imagine to be played in any game mode they wish.

MyWorld is a game where players build games. These games can then be safely stored on a local file or uploaded to be shared and improved on by the MyWorld community. Players have full control over their games; building the objects, choosing the genre and scenes, setting the rules, and deciding who plays the game, meaning game builders can set a game as single-player, PvP or Co-Op.

The actual building of a game in the MyWorld platform happens primarily in two settings: design mode and constructor mode. In design mode, players can quickly place and remove objects within the world of a player-created game. In constructor mode, these placed objects are actually designed by the players in a model editor. And players can build more than just aesthetically beautiful settings, their designs can be functional too. Game designers are able to build everything from turrets, to sensors, to full-fledged robots. As players build and play more, they will level up, unlocking valuable pre-built materials to use in their games, adding a level of progression to the game.

MyWorld game creators can customize their avatars in a plethora of ways to build a customized persona. While the game has already been demonstrated on livestream, MyWorld has a bit to go before it is ready for release and the next phase of development will require resources the team simply does not have. To remedy this issue, the MyWorld team has launched a crowdfunding campaign on Kickstarter. Early backers will receive a collection of exclusive materials as a reward for their support. With the help of readers, everyone will be able to build and share the game of their dreams. 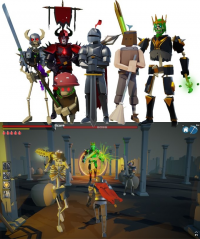