New York, NY -- (ReleaseWire) -- 04/24/2015 --Self-Defense and urban survival experts Jeffrey Miller of Warrior Concepts Int'l, and Mark Booher of Rubicon Training Group reveal that private individuals concerned about the recent threats on the Mall of America and other civilian-based "soft-targets" by ISIS and other terrorist groups, can be better prepared to protect themselves and their loved ones should they face such a violent attack. They recently revealed how the typical "Mad Max", end-of-the-world, "doomsday" scenario that's being preached by most survivalist communities and blogs is probably 'not' the thing you're most likely to face, and how the truly prepared prepper can use current events and a highly focused, targeted training program to be ready to survive a more likely scenario that may be just over the horizon.

"Let's face it," says Miller, a former undercover black market and drug suppression agent, private investigator and U.S. Army Military Policeman trained in counter-terrorist operations," with the increased terrorist attacks on domestic soil, coupled with the increase in mob violence and other dangers, there are more considerations for the average concerned private citizen when it comes to getting the kind of self-defense and urban survival training that will actually keep them and their loved ones safe during an attack situation than merely putting together a 'bug-out bag' and stocking up on food and ammo."

According to Booher, a former criminal prosecutor who also served with the U.S. Army but in the Intelligence Corps and trained in counter-terrorist operations by Israeli special ops, "Contrary to popular belief, the world isn't going to just go black, with everyone fending for themselves. That's why the prepared survivalist must think differently about where to find the kind of training that actually saves lives, rather than buying into thing that end up being more akin to an outdoor adventure camp."

Both Booher and Miller agree that, unfortunately, most programs available today don't do this. Which is why the two of them have decided to join forces, so-to-speak, and produce the kind of training programs that the average individual needs to survive the danger that actually exists.

Both homeland security advisor, Lisa Monaco, and Michael Morell, the former deputy chief of the CIA spoke recently about the increase in attacks from this new breed of terrorist threat, and how an attack could come from anywhere, and in any community, because of the ease in which a lone wolf attacker can be inspired and radicalized.

When looking at almost any attack, there is a predictable cycle that the terrorist or criminal attacker uses to identify or "mark" a particular target, gather details about the ease or difficulty of attacking it, carrying out the attack itself, and more. Understanding this cycle or phases of progression in a self-defense situation, and whether or not his workplace or other location is a likely target of attack, allows the expert to be more successful and increases their chances of surviving. Serious survivors demand more than broad stroke "doomsday" beliefs and theory. They spend a lot of time, effort and resources networking with friends and advisors to find the right training, applicable to real-world threats and dangers -- wherever it may be in the world.

Unfortunately, the average citizen does not have the real-world street experience or time to do the research into both the attack paradigm, nor the credibility and effectiveness of any given program or self-defense training system. This is where Miller and Booher share the benefits of their knowledge, experience and research.

The programs designed by Miller and Booher are not just theory, fancy karate moves, and other skills mixed together in an ad hoc manner, as they have been teaching these skills, tactics and techniques, both online and in intensive, hands-on training courses, to average concerned private citizens, law enforcement and security professionals, and members of the military for years.

"The lessons he (Miller) taught me about how an attack plays out and what to look for at each phase was extremely helpful when I was attacked in a local mall parking lot by two assailants - one armed with a knife. The techniques and skills may not look as flashy as the self-defense system I studied before, but the effectiveness and amount of power, confidence and control I had in that very real encounter speaks for itself, " said Nathan Cooper, a communications specialist from Pennsylvania.

"This training is definitely much more challenging to learn because of all the factors that I have to consider to really be prepared. But you just can't beat being able to train with someone who has real-world experience, who can not only teach you what to do, but why, how and under what conditions. That's why I keep coming back to every seminar and training opportunity being offered," said James Alexander.

And, according to Sam Pagano, a former grade school teacher from Niagara Falls, NY, "The hands-on training is perfect for someone like me who has nothing to rely on but movies and YouTube videos being taught by people with questionable or unknown backgrounds. My biggest take-away is the tactical application of the skills and how everything meshes with all of the other training they offer. I don't have to worry about learning pieces from many different theories and then try to put them together - it's all done for me so I can just train and get it right."

To learn how to see past the hype and "doomsday" messages, become an above average survivalist who understands and can handle the real threats to your safety, and get information about upcoming training opportunities, you can visit Miller's site at: warriorconceptsinternational.com/?p=6362, or Booher's site at: rubicontraininggroup.com 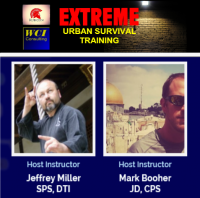