In the World of ISO, He's It: Daryl Guberman Reveals Why 'Quality Is out of Control'

Milwaukee, WI -- (ReleaseWire) -- 08/23/2012 --The manufacturing community across the country appears to be in the midst of an industrial revolution inside the quality arena. Some are even calling it an heroic story of 'David vs. Goliath.' In recent months, manufacturers have been flocking in droves to Guberman-PMC, LLC (http://dguberman.com) to acquire their fully-accredited ISO certificate issued by G-PMC, a stand alone registrar. During that period, the company's president Daryl Guberman and his spirited colleagues have been valiantly shaken up the world of ISO by revealing how quality is out of control, and publicly demanding changes be made.

In a recent interview published on YouTube, Guberman said he believes the ISO certification process was never intended to have all or most registration companies overseen by a single accreditation body, which he warns results in a monopoly. According to Guberman, there are no standards that he knows of by which a single certification body can define who can accredit whom, nor should such protectionism be legislated, whether it be directly or indirectly as a repugnant means to safeguard the profits and interests of a conglomerate.

“Companies are increasingly seeing ISO and the quality process as being distorted and financially driven, requiring an investment of a lot of money to gain acceptance and approval based on standardization procedures that is non-consistent, so you end up with something being a standard that is not clear, which only devalues the confidence people have in the standards setting process,” said Guberman. He added, “The certification process as it stands today is flawed, and no better than the ‘Fox Watching the Hen House.' In contrast, unlike nearly all registrars that are required to report to the same international accreditation body, G-PMC, LLC as a single entity and standalone registrar reports directly to the Industrial Leaders Group (ILG) which serves as its sole accrediting body. Guberman said although his registration company follows in spirit the principles and methodologies of ANSI-ASQ National Accreditation Board (ANAB®), the company is committed to remain independently accredited to bring an alternative choice to customers and maintain its competitive edge with emphasis on helping businesses achieve affordable, value-added certification.

Donald Labelle, CEO of the American Machine Shops Network (AMSN) consisting of 1,200+ members said he fully supports Daryl's courageous efforts to fix a broken quality system. Labelle is also the pioneer of the U.S. Manufacturing Movement (USMM), a grassroots campaign he established earlier this year to bring work back to American manufacturers. Other prominent supporters of Guberman include a number of other industry professionals, organizations and private businesses at http://dguberman.com/Endorsements.html

About Guberman-PMC
Guberman-PMC is owned and operated by Daryl Guberman, a quality professional with over 30 years of experience in the aerospace, medical implants and materials, and printing fields. Throughout his career, Daryl has saved companies substantial amounts in constructive, productivity-enhancing suggestions utilizing special talents including an unrivaled dedication to quality, maintaining constant communication and feedback with customers, and securing ISO-9001;2008, 13485, AS9100, and TS16949, as well as ISO-17025 and ISO-14000 compliance and certification.

ANAB (TM) is a Trademark of ANSI-ASQ National Accreditation Board, Milwaukee, Wisconsin.
G-PMC, LLC is an independent and impartial standalone registration company. 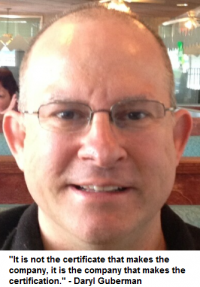