IndyCar Driver Gets Career Back on Track with Onefit Scleral Lenses

Manchester, NH -- (ReleaseWire) -- 10/26/2017 --IndyCar driver Gabby Chaves, #88 of Harding Racing, visited Brad Altman, OD, FSLS of Aprima: Consultants in Eye Health in Mt. Juliet, TN, to be fit with his new Onefit MED scleral lenses, manufactured by Blanchard Contact Lenses. Chaves, who has Keratoconus, has been wearing Onefit lenses since February 2017 and attributes the lenses with the best vision and eye comfort he has experienced in many years. Chaves has had immense success with Onefit lenses thus far, having achieved better than 20/20 vision in both eyes, resulting in an unrestricted IndyCar license and his best ever finish in the 2017 Indianapolis 500. When the advanced Onefit scleral lens design Onefit MED was released last month – specifically for highly irregular, medically indicated corneas like Chaves' – he was quickly referred to Dr. Altman to be re-fit in the Onefit MED scleral lenses.

"The larger optical zone of the Onefit MED lens lends itself to greater peripheral views and even better lens stability - which will only benefit Chaves further in his racing career" said Dr. Brad Altman. "Onefit and Onefit MED scleral lenses are an excellent, game-changing option for all athletes who need vision correction that will enhance and not hinder their performance."

After being named Rookie of the Year in 2015, Chaves had problems with his vision deteriorating and was issued a restricted IndyCar license for the 2016 IndyCar season. He tried to make do with heavy prescription glasses and soft contact lenses – both of which were very uncomfortable for him when driving. Even with the glasses and soft contacts, he was still very close to failing the yearly IndyCar eye exam for the 2017 season, and the IndyCar eye doctor expressed serious concerns. So, in February 2017, Chaves found an eye care practitioner who performed a Corneal Cross-Linking procedure and prescribed him Onefit™ Scleral Lenses. Chaves went on to take 9th place in the Indianapolis 500 three months later – his best ever finish in the Indianapolis 500.

"When driving at 240mph, the last thing you can afford to worry about is eye comfort or fluctuating vision" said Gabby Chaves. "I am very grateful to Onefit Scleral Lenses for helping to get my career back on track."

Onefit™ scleral lenses are designed and manufactured by Blanchard Contact Lenses, a leading specialty contact lens designer and manufacturer in North America. "We designed Onefit scleral lenses to have an array of benefits, including crystal clear vision, exceptional comfort and stability, and protection from environmental hazards, which make them the ideal choice for athletes and active individuals such as Gabby Chaves" said Jean Blanchard, President of Blanchard Contact Lenses. "We look forward to the opportunity to bring Onefit lenses to other athletes, to help maximize their vision and performance" added Blanchard. 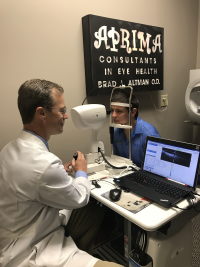 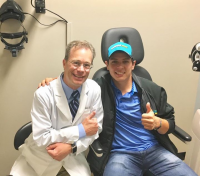 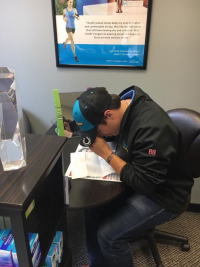