The defendant was the United States of America. A U.S. Army convoy truck stopped on the railroad tracks in Almagordo, New Mexico. The Union 2.9 Million in Trial WonPacific train Acosta was driving hit the rear of the army truck. Acosta's injuries required a back surgery and other medical care. Acosta claimed he was unable to return to work as a train engineer.

Acosta hired Jonathan S. Harris of Schechter, McElwee, Shaffer & Harris, LLP to pursue a claim against the federal government for his damages. The case was filed under the Federal Tort Claims Act in the United States District Court for the District of New Mexico. Attorney Jonathan S. Harris immediately conducted an investigation into the collision and secured statements from key eye-witnesses. Harris and his team also recruited experts to render opinions on all aspects of the case, including Acosta's economic losses and future medical needs.

Throughout the case, the defense team vigorously contested the army convoy driver caused the accident and also contested Acosta was hurt. The defense argued there were only scratches to the train and truck from the impact. The defense also relied on a biomechanical engineer who examined the weight of the vehicles, their speed, and other factors before concluding that forces from the impact could not cause injury to Acosta. To rebut the biomechanical analysis, Acosta's attorneys hired a forensic epidemiologist who showed Acosta's injuries could be explained by a three-step differential analysis that accounts for temporal relationships, alternative causes, and the variability of injury threshold levels.

Acosta's counsel, Jonathan Harris, conducted a series of focus groups to determine how best to present the case at trial. Harris and his co-counsel Laura De La Cruz also brought in a jury consultant to prepare Acosta for his day in court.

The case came to trial on April 18, 2017 in the United States District Court for the District of New Mexico in Las Cruces, New Mexico. Over the course of three days, from April 18- April 20, 2017 Jonathan S. Harris and Laura De La Cruz presented evidence from fourteen witnesses and over 1,500 pages of exhibits.

In a great legal victory, Judge Stephan M. Vidmar ruled in favor of Acosta and entered judgement against the United States of America for $2,917,240.38 plus post-judgment interest and costs.

Jonathan Harris says the most satisfying part of the award, aside from Acosta getting what he deserves, was proving the judge would make a substantial award. The U.S.A.'s attorney had been telling Harris during the two years it took to get to trial that the judge would never believe Mr. Acosta was injured in the accident. 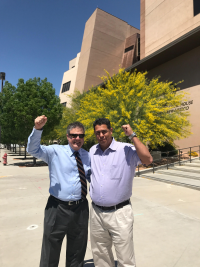