Innovation Evangelist on a Mission to Get America's Kids Inventing Again

San Francisco, CA -- (ReleaseWire) -- 03/05/2015 --World-renowned innovation author and thought leader Nicholas Webb is on a mission to get America Inventing Again. Why? Last few years China has actually filed more US patents than US companies.

According to Webb this is a national emergency. "In the old days we needed to train factory workers to essentially be compliant robots. Today we need to teach innovation and innovation doesn't come with instructions". Webb's concern is that many toys today are nothing more than three-dimensional puzzles that come with step-by-step instructions that are great for teaching replication, but very poor on teaching innovation.

During the Industrial Revolution we created the manufacturing boom, which we later turned over to China. Today were very much at risk of losing our innovation leadership in the world by not exposing our children to real-world innovation platforms and training.

Webb invented a full line of educational toys http://www.hanztoys.com that shockingly boast the phrase "Instructions Not Included". His goal is to get children interested in exploration, ideation and ultimately innovation. His toys were so well received that they became one of the most award-winning construction sets in the toy industry. He believes that we need to go beyond the current STEM education programs an acronym for Science, Technology Engineering and Math and start getting kids inventing at an early age.

About Nicholas
As an innovation evangelist Nicholas travels around the world speaking on the future of technology and innovation http://www.nickwebb.com. His goal is to lead a movement on getting America Inventing Again. As a philanthropist Webb donates educational platforms and training materials to under-served and inner-city schools, additionally he supports great programs like Teach for America. Webb believes that one of the greatest opportunities is to expose underserved and inner-city youths to the excitement and fun of getting involved in innovation projects and STEM. The principles and science are so solid around his platform that even fortune 500 companies are using his product to teach executives iterative ideation, collaboration and other innovation principles.

The Hanz Toy line is available at many national retailers, independent specialty retailers and is sold directly on their website http://www.hanztoys.com 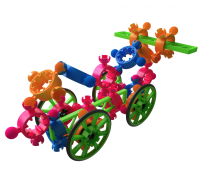