Los Angeles, CA -- (ReleaseWire) -- 10/20/2016 --Inpire Clothing Co., the revolutionary clothing company that is seeking to make a difference around the world with fabrics of Incan origins, is live on Kickstarter and raising funds to bring the project to life.

Inpire Clothing Co. is on a mission to 'blend old world craftsmanship with modern day aesthetics.' The company is working with designers from all over the world to create something with "Aguayo', fabric, a cultural heritage from the ancient Incan civilization. Aguayo has been produced since the ancient times in the Andes cultural areas that include Peru, Bolivia, Argentina, Chile, Colombia, Ecuador etc. Produced as early as 2,300 B.C., Aguayo is produced is still produced in the most traditional method for its unique color scheme and designs as well as a weaving style not seen in other fabrics.

Inpire Clothing Co. is on a mission for Aguayo to be reinterpreted in as many ways as possible. The company is currently working in collaboration with designers all over the world with diverse backgrounds. Inpire is leaving all their channels open in order to collaborate with an even wider range of designers worldwide. and is inviting designers from all corners of the world to join their mission with new, inspirational ideas. Most people who produce Aguayo across South America are of the Ayama or Quechua tribes, minority groups in the continent. As their business grows, it is their aim to help improve the life conditions of these groups.

"Our ultimate goal is to increase the quality of life in various weaving ladies to produce Aguayo from Peru, Bolivia and other areas. The various people in diverse areas are producing Aguayo, you might know if you visited local areas. However, sufficient and stable demand does not exist for those who producing Aguayo. Therefore, it used to be sold as "Blanket" type in the form of souvenirs, not the fabrics in the form of roll," says founder and CEO Richard Song. "It has difficulties to occur massive demand and produce massive production either. Inpire Clothing Co. has been studying the way to improve for production and distribution fundamentally over the 1-2 years before launching the products rather than simply attracting by launching the unique products."

Currently, 15 different hats have been fully developed, with more items including bags and other product lines being tested aimed for 2017 S/S Season. Included are various color ways and styles including New Era style snapbacks and classic camp caps with 6 panels and a leather strap. Interested designers can also back the project and receive a sample fabric pack for their aspiring designs.

The Inpire Clothing Company campaign is currently live and available to support on Kickstarter: http://kck.st/2ejUGbA

About Inpire Clothing Co.
With Our mission to 'blend old world craftsmanship with modern day aesthetics', Inpire Clothing Co. is working with designers from all over the world to create something with 'Aguayo', fabric, a cultural heritage from the ancient Incan civilization. 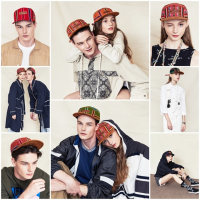