Boston Kade Jensen was born at 3:32 p.m. on April 5, 2021, to Courtney and Kade Jensen. Boston weighed six pounds, six ounces and measured 20 inches long. April 5 will be a big day in the Jensen family, because the Payson couple has an older son, Grayson, who also celebrated his second birthday on April 5.

"It hasn't hit him yet really. But we did a Facetime call with him and he said, 'Hello baby," said Courtney.

The 27-year-old mom of two said she was scheduled to be induced over Easter weekend, but jumped at the chance to be scheduled first thing Monday morning at the new hospital.

"I've been super happy with our decision to come to Spanish Fork Hospital. I love the smaller feel, and everyone has been very welcoming and friendly," said Courtney, adding she'll be back to Spanish Fork if they decide to have another baby.

"I've been in the best of hands. All the nurses and doctors have treated us like family," she said.

In addition to women and newborn services, Spanish Fork Hospital has a 24-hour emergency department, an InstaCare, inpatient and outpatient surgery, imaging services (including MRI, CT scans, mammography, ultrasound, and X-ray) as well as endoscopy, infusion and lab services.

About Spanish Fork Hospital
Spanish Fork Hospital is part of Intermountain Healthcare, a not-for-profit system of 25 hospitals, 215 clinics, a Medical Group with 2,500 employed physicians and advanced practice clinicians, a health insurance company called SelectHealth, and other health services in Idaho, Utah, and Nevada. Intermountain is widely recognized as a leader in transforming healthcare by using evidence-based best practices to consistently deliver high-quality outcomes and sustainable costs. 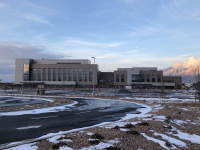