Despite its name, the Gamma Knife is not a knife at all – and the treatment involves no scalpel or incisions. Instead, Gamma Knife treatment uses precisely-focused gamma rays or radiation from 192 sources angled onto a single point with an accuracy of less than one-tenth of a millimeter (about the thickness of a sheet of paper), minimizing the radiation to surrounding healthy tissue.

A large part of this upgrade included replacing the sealed radiation source, Cobalt-60, which declines in strength over time and needs to be replaced every five to seven years. With the new radiation source, treatment time will be decreased for patients and larger tumors can be treated.

For patients like Amanda Peterson, 43, she says Gamma Knife treatment has allowed her to plan for the future. In 2013, Peterson underwent a bilateral mastectomy for breast cancer, but three years later the cancer spread to her brain. Doctors discovered 15-17 tumors in the back of her head. Radiation oncologist Grant Hunter, MD prescribed Gamma Knife treatment. After just one session, Peterson said she walked out of Intermountain Medical Center the same day and enjoyed dinner with friends.

"I'm so grateful it's (Gamma Knife) here," said Peterson. "One of the least invasive things I've done for cancer. And that's saying a lot because I've gone through a lot of cancer stuff."

The Gamma Knife provides an alternative treatment to traditional brain surgery, or whole brain radiation therapy for the treatment of many brain conditions, including malignant and nonmalignant tumors, as well as vascular and functional disorders of the brain.

According to Dr. Hunter, Gamma Knife radiosurgery is considered the most accurate form of stereotactic radiosurgery available.

"Gamma Knife radiosurgery is a wonderful option for our patients," said Dr. Hunter. "It provides highly accurate and effective radiosurgery for unresectable brain tumors. It also allows for aggressive treatment while limiting the toxicities."

The Gamma Knife allows treatment to some of the most critical, difficult to access areas of the brain. Procedures are typically performed in a single outpatient session without general anesthesia, which means most patients are in and out of the hospital in one day. Patients also avoid incisions, scarring, and surgical complications. And, its high accuracy means radiation does not affect healthy, normal brain tissue.

The upgrade also includes a change in the stabilization mechanism. Traditionally, patients undergoing Gamma Knife treatment are fitted with a head frame which allows precise positioning. With the new upgrade, patients may instead be treated with frameless, mask-based radiosurgery. The mask-based treatments are equipped with infrared imaging and advanced motion management systems. These technologies are more comfortable for the patient and ensure that the patient can be treated accurately and reproduced over several therapy sessions.

This new Gamma Knife system includes an on-board Core Beam CT Scanner, allowing scans to be taken immediately before treatment, ensuring the radiation is right on target. Physicians and technicians also now have access to upgraded software and a planning system, allowing for even more personalized treatments.

Patients are already receiving treatments with the new Gamma Knife at the Jon & Karen Huntsman Cancer Center on the Intermountain Medical Center Campus in the Radiation Therapy Department.

For Peterson, who knows she will be back for another treatment in the coming months, she says she's grateful for the "borrowed time" the Gamma Knife has given her. 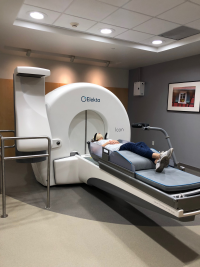 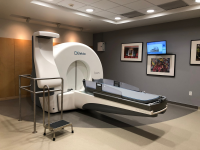 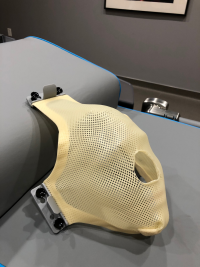