As the video game industry continues to rise, it is vital that designers bring innovation to the field. Here for just that is Brawl of Cards, a Collectable Card Game featuring solo and team play.

Rijeka, Croatia -- (ReleaseWire) -- 10/06/2016 --The real-life player base for card games is gargantuan, and the digital market is even fifty percent larger, containing thirty-seven million people. (1) And this population is dying for some in-game multiplayer interaction. This desire was made shockingly obvious by Pokemon Go's prevalence, incorporating just three teams and barely-functioning team battles. Brawl of Cards is a whole different beast. As a deck-based Collectible Card Game (CCG), Brawl of Cards features all the creativity players love in constructing their own playstyles. But more notable are the Brawl of Cards innovative formats. Of course the game includes the standard one vs one gameplay, but it also includes two vs two duals, and even three vs three team battles.

Part of what makes Brawl of Cards like no other card game is its depth of gameplay allowed without overwhelming new players. The game includes over fourteen thousand cards, six races, and twelve classes. This wealth of cards allow near infinite combinations. And aside from sheer card quantity stands artistic quality. The set features beautifully crafted card faces paired with a heroic aesthetic, giving every playthrough a feeling of adventure.

Another value of Brawl of Cards is competitive integrity. To this end, the game will host three ranked ladders, each containing its own leagues. The three ladders will correspond to solo, team, and clan skill, allowing players to hone in on their strengths and weaknesses as a team tactician or a master duelist. To fuel the game's final phase of production, Brawl of Cards has launched a Kickstarter crowdfunding campaign. Patrons can receive anything from a poster, to a Brawl of Cards hoodie, to the office real-life rendition of the game complete with 360 bonus cards. And support does not have to be monetary, just sharing the link to the campaign with a friends is greatly appreciated. With teamplay, clans, card variety, and stunning graphics Brawl of Cards is well on its way to becoming a world-class Collectable Card Game.

About Brawl of Cards
Brawl of Cards is produced by Bidaj, an up-and-coming Croatian design team. What started as a small IT help company in 2011 has transformed into a promising video game startup that is excited to bring Brawl of Cards into reality. Today the company has launched its crowdfunding campaign in order to accelerate the production of the game, getting it quickly to the hands of an eager audience.

To learn more or support the campaign visit the Kickstarter campaign page. 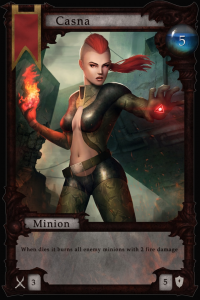