Today wallets are less safe than ever with the refinement of ID theft, RFID duping, and old fashioned pickpocketing. Here to help is the fingerprint protected Cashew Smart Wallet.

San Jose, CA -- (ReleaseWire) -- 11/22/2016 --Every day that passes, another four hundred thousand dollars are lost due to pickpocketing. * What's worse is that many experts speculate that this statistic is massively deflated due to the number of pickpocketing incidents that do go by unnoticed. And pickpockets are far from the only way to lose hundreds of dollars in an instant. Wallets can be left behind, either at home or in a crowded grocery store, and eventually stollen. Parents can even fall victim to the hands of their own children, swiping five dollars every week for a candybar. Here to stop all of this chaos is the Cashew Smart Wallet, the world's first fingerprint protected wallet. Never again will a wallet be lost, opened, or left behind without the owner's knowledge.

The wallet itself is equipped with a highly-intelligent and stylishly-integrated fingerprint reader on the front flap. The scanner is able to remember up to twenty fingerprints, allowing wallet owners to allow access to family members as well as all ten of their own fingers. The convenient location enables users to unlock the wallet even before they take it out of their pockets, keeping the process clean.

But the Cashew Smart Wallet is more than just a fingerprint lock, it features other innovations as well. The wallet is Bluetooth enabled, providing simple connection to the free Cashew app from any smartphone. This app is what prevents the possibility of losing or forgetting the wallet Cashew Smart Wallet. The app knows the location of the wallet and immediately notifies the owner if the wallet is left behind or taken. The wallet owner can then play a loud locating sound from the wallet and find its hiding spot with the typically culprit: the couch cushions. As a side benefit, the wallet is completely RFID-protected, blocking new age hackers who attempt to steal from newly implemented credit card 'chips'.

And worry not, for practicality has not been forgotten. The Cashew Smart Wallet implements a maximum capacity trifold design to accommodate the needs of any user. Unfortunately, a project of this scope requires funding to produce. To keeping manufacturing prices low, the Cashew design team has opened the wallet up for preorder via a crowdfunding campaign on Indiegogo. Early adopters will be rewarded with discounts of over forty percent off the planned retail price. With the the Cashew Smart Wallet, no one will have to suffer the fiscal damage of wallet thievery ever again. 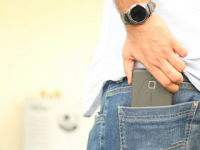