Introducing Coffee Crisis, a 2016 Game for the SEGA Genesis

A small coffee house and an indie game studio have teamed up to produce a good old fashioned beat ‘em up game, featuring the deadly weapon of a heavily caffeinated coffee bag.

Pittsburgh, PA -- (ReleaseWire) -- 11/10/2016 --The SEGA Genesis reached the United States market in 1989, taking the gaming world by storm. Players were enthralled by the arcade-like experience as the console fed off of the lackluster performance of the Nintendo gaming giant. The beloved console was home to the Sonic The Hedgehog series, garnering over twenty-five million sales. * Today there is still a thriving market of retro game collectors searching for the same retro feel. Coffee Crisis by Mega Cat Studios is here to provide that exact feeling. With versions available for the PC and the SEGA Genesis, both long-time retro players and newcomers to the genre will be able to enjoy the lighthearted game.

The game itself is centered around a team of baristas, Nick and Ashley, armed with nothing but their trusty sacks of Black Forge coffee beans. Our heroes face a rather ordinary world with one extraordinary looming crisis: an invasion by the alien Smurgelian race. The Smurgelians have come to take four of Earth's treasures: metal music, amazing coffee, adorable cats videos, and fast WiFi. To make matters worse the aliens are assimilating the weaker human beings, making quick work of grandparents and country western singers. Our heroes are left with no other option but to battle their way to a solution in this beat 'em up brawler.

Aside from the hilarious plot of the game stands the quality of its production. The design team at Mega Cat Studios made full use of the computing power available to the SEGA Genesis. Packed into the cartridge is a full color game with high-definition 16-bit graphics, truly cutting-edge technology. Sadly a project of this scope requires funding to make it to market. To remedy this issue the Mega Cat Studios team has launched a crowdfunding campaign on Kickstarter. Patrons can be rewarded with Demon blend coffee, copies of the game, or even a vinyl album of the Coffee Crisis soundtrack by Greywalker. With the support of readers Coffee Crisis will be able to bring back nostalgic gameplay mixed with hard metal, a truly unique blend of flavors.

About Coffee Crisis
Coffee Crisis was crafted by the folks at Mega Cat Studios, paying homage to the thriving and unique community surrounding the local coffee shop, Black Forge Coffee House. Retro gaming, metal music, and coffee, are almost completely unrelated, but this game has managed to merge the three in nostalgic hilarity, an achievement Mega Cat Studios prides itself on. 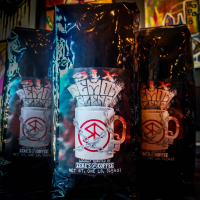