In today’s world of gaming, depth and personalization are everything. Here to benefit both of these aspects is Concept Crowd Gear, the game made by the players for the players.

New York, NY -- (ReleaseWire) -- 11/28/2016 --The importance of depth has never been greater in the field of gaming. One only needs to look to the recently launched No Man's Sky to see this effect. The game was hyped up for its endless depth of content, yet it failed to meet the expectations of many and is widely criticized for its reuse of content. Love it or hate it, No Man's Sky was made and destroyed by the same desire for depthful content. Here to provide truly endless content is a new player in the gaming world with a revolutionary game: Concept Crowd Gear. The RPG-like game is packed with the smallest of details, large-scale puzzles, and everything in between.

To achieve this level of depth, the Concept Crowd Gear development team simply took advantage of the bewildering resource readily available: the creativity of human minds. To tap into the innate human ingenuity, the game allows massive amounts of user submitted content ranging from new landscapes to new items. This content is constantly being added to the game, keeping every playthrough unique and fresh. And worry not, for there is a vetting process for all user-submitted content, keeping the quality of the game high. On the Concept Crowd Gear forum, users can propose content additions as well as vote on what content should be allowed to pass, enabling the players to shape the game.

The game itself will be completely free and feature a steampunk aesthetic. Players will travel through the Concept Crowd Gear world, find rare items, battle mythical foes, and more. However, the stakes are incredibly high as permadeath is permanently enabled, adding a level of realism to the game. Sadly, a project that has the potential to revolutionize the gaming industry with user-submitted content requires funding to produce. To remedy this issue the Concept Crowd Gear development team has launched a crowdfunding campaign on Kickstarter. Patrons will be rewarded with anything from access to the forums to the ability to make a major addition to the game. With the support of readers, Concept Crowd Gear will lead the industry as a game built by the players for the players.

About Concept Crowd Gear
Concept Crowd Gear was conceived by Alf Baez, a cloud systems architect, encryption expert and counter-terrorism engineer at the Department of Defense. With over seventeen years of experience, Baez hopes to put his skills to the test with a team of equally qualified developers and the support of user-submitted content. The result is Concept Crowd Gear, a stunning game brimming with content.

To learn more or support the game visit the Kickstarter campaign page. 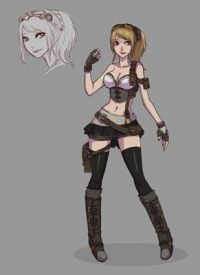