Introducing Ever After, a Fairy Tale Twisting Board Game

Fairy Tales are an integral part of growing up. Today a company by the name of Xrosstales aims to incorporate fairy tales together into one universe with a board game called Ever After: Twisted Realm.

Bangkok, Thailand -- (ReleaseWire) -- 04/19/2017 --Every child has heard the stories of The Big Bad Wolf, The Wizard of Oz, and others. Each story taught a moral or two, setting up a unique and fantastic premise, and told the tale of the premise playing out. However, these stories have always been relatively contained in their own, isolated universes until now. What if Dorothy and little Red Riding Hood were one in the same? This is the idea of Ever After: Twisted Realm. In the world of Ever After, the stories are the same as they have always been, with one dramatic change: every fairy tale was told with no identifying names. In turn, Snow White and Cinderella were both nameless protagonists, so the two stories could both have revolved around the same nameless princess.

Needless to say, this premise creates a variety of unique dynamics; however, the board game has added a few dynamics of its own. In Ever After there are two core factions: Dawnguard and Eclipse. These factions were formed after unspeakable power were given to all of the people in the land. The Dawnguard were those strong enough to resist the temptation of power while Eclipse was formed of those who succumbed to less noble desires.

At the start of the game, players will be dealt a character card to be kept secret. This card contains the player's identity, goals, and motivation. Additionally, every player is assigned a partner, no partner is sure of how loyal or antagonistic their partner is, and no player knows who their true allies are, creating a mysterious, yet competitive dynamic akin to games like the Town of Salem. As the game plays out, players will encounter obstacles, quest cards, and item cards, creating a unique gameplay experience every game.

Even just looking at the map of the board game brings thoughts of exciting gameplay opportunity. The map combines Wonderland, Neverland, the Land of Oz, Camelot, Fairyland and more. The result of combining these fantastic places with characters from far away realms results in the twisted realms that makes Ever After a truly entertaining board game.

Sadly, developing a game that combines this many plot lines is not an easy task, especially considering the level of art quality that is going into making Ever After an immersive board game. To solve this problem, the Ever After team has begun a crowdfunding campaign on Kickstarter to accept discounted pre-orders for the first wave of production. With the support of readers, the Ever After team is excited to make Ever After: Twisted Realm a staple in every board game party and game collection. 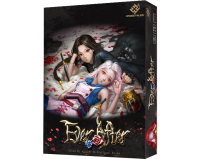