Solomons, MD -- (ReleaseWire) -- 03/20/2017 --First responders are some of the nation's most heroic individuals. They are thrown into emergency situations while the emergency is still occurring. Often these responders are needed at the scene so quickly that they are not fully briefed on the situation. As a result, first responders have to be ready to tackle any situation. It is this versatility combined with the dire setting of the job that makes working as a first responder a truly heroic deed. The perfect example of just how vital these responders are is September 11th, an infamous day in United States history. Despite how unprecedented the attack was, despite the shellshock that stunned the public, despite the carnage in the city of New York, thousands of first responders took to the streets to help in any way that they could.

For these first responders, the job itself is the reward rather than the salary. First responders are honored to be at the aid of the public, doing their duty for the good of the people. However, many first responders need an additional source of income to sustain themselves and the families that they support. This need for external income alongside the various settings a first responder experiences leads to many first responders launching their own businesses. In turn, these entrepreneurs can be seen doubly heroic as they fuel the nation's economy while protecting the nation's people. Sadly, these heroic hopefuls face a variety of obstacles while trying to succeed in the cut and dry business world.

To help these brave souls make it in the business world while continuing to do what they love as first responders, David Grear has begun work on his latest website named First Responder Industries. Through the website Grear hopes to help first responders gain traction for their businesses in the way of advertising beyond simple word of mouth. 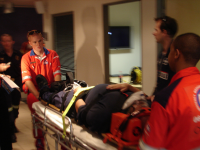