The world of RPG’s has long enthralled many gamers. Unfortunately, the all too typical ‘chosen one’ plot bores gamers. To revive the genre is Heroes Cove, a multiplayer card-based RPG.

Herriman, UT -- (ReleaseWire) -- 10/25/2016 --This year, the hobby game market finally broke one billion dollars in industry worth (*). As a result, game producers have been in a frenzy, producing lackluster games left and right. This strand of new games has inbuilt inconsistencies, unappealing characters, and other tragic flaws. This is the market Heroes Cove will enter. The design team could have easily just skated by and produced a game ever so slightly higher than the market standards; instead, the team went all out. The product is a captivating game with meaningful backstory, massive variety, and full-fledged family fun that far exceeds the industry standards.

Heroes Cove is truly something special. To grasp the effort put into this game's production, one only needs to look at the numbers. Sixty quests, five decks, two hundred and seventy-five cards, and countless playthroughs are all packed into this brilliant game. What's more is that the designers will not stop there. The team already has expansion plans in the works. Adding to this depth is a diverse cast of characters, each with their own backstories and special abilities. Players can be anyone from Grant, the hastily elected sharif, to Jataka, the bunny-like, lightning-fast fighter. Augmenting the immersiveness of the game is a collection of short-stories on the Heroes Cove website, giving the game yet another layer of depth through lore.

Aside from simply depth of setting is the quality of gameplay. The game revolves around a number of quests, selected from a sixty card deck. The number of quests can be increased or decreased to adjust playtime, but it typically stands at around six or seven, yielding a thirty to forty minute game. Players will need sufficient prerequisite items from the armory to enter a quest, where they will face dicey battles and heroic tasks. Within a quest players can lose health points, and eventually die, or gain victory points. At the end of the game the player with the most victory points wins the greatest prize of all: bragging rights.

Unfortunately this family-friendly RPG is lacking the funds to effectively advertise and create the stunning art the cast of characters deserves. To remedy this issue the Heroes Cove team has launched a crowdfunding campaign on Kickstarter. Patrons will be rewarded with anything from a social media shoutout, to a copy of the game, to a say in the design of the next class and race. With proper support, Heroes Cove will combine these values of depth and quality to create the ultimate tabletop provider of family fun. 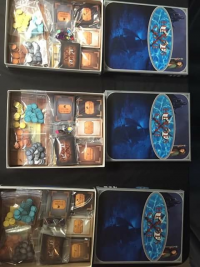