Introducing Race Wars, a Brawl Between Trump and Clinton

This year’s election cycle has narrowed the presidential race down to two infuriating candidates: Trump and Clinton. Here to let the people duke it out is the clan-based app titled Race Wars.

Ottawa, ON -- (ReleaseWire) -- 10/10/2016 --The disapproval ratings for the 2016 presidential candidates are abnormally high, holding the worst favorability ratings in decades. (1) These numbers are reminiscent of the 1992 election where third party candidate Ross Perot actually claimed over eighteen percent of the popular vote. With this level of disapproval, the people of the United States need a way to vent their anger. This is where Race Wars: Trump vs Clinton fills its niche. The game is a satirical look at this year's presidential election, allowing users to pick a side and conquer America on the campaign warpath. Race Wars is essentially a fast-paced battle over states and monuments to declare either Clan Trump or Clan Clinton the winner.

The game includes both multiplayer and single player aspects. In the single player scene, users can race against the clock, fighting for the best time. As for the multiplayer features, players will identify as either Clan Trump or Clan Clinton at the beginning of the game and contribute their scores to the battleground states: Washington, New York, Nevada, and more. As a result, dedicated players will see their team rise to the top of the weekly leader board, boasting massive bragging rights.

The gameplay itself is a tug-of-war-style battle, either against a live opponent for two minutes, or against the pressure of the clock. But Race Wars wants to become even better. To achieve this goal the parent company, Arctic Empire, has launched a five thousand dollar crowdfunding campaign. Money raised will go towards the development of new features like an in-game minimap, improved animations, and more game modes. Patrons will receive rewards like an ad-free version of the app, a Race Wars: Trump vs Clinton T-shirt, or even a set of Trump and Clinton sock puppets. With the support of readers Race Wars hopes give America an addictive, non-destructive, way to duke out some hatred virtually and peacefully.

About Race Wars: Trump vs Clinton
The Race Wars series was created by Arctic Empire, Inc, an innovative design company founded in 2010. Arctic Empire has a wealth of experience, having designed over fifty great apps, and has over fifty years in combined experience. With this expertise, the company plans to improve Race Wars: Trump vs Clinton with new features by November of this year. After that the series will only grow, including other rivalries under the Race Wars brand.

To learn more or support the development of Race Wars visit the Kickstarter campaign page. 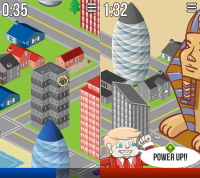 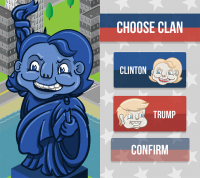