As cities continue to grow, roadway vehicles become simply impractical for getting around, but walking can be too tiring or slow. Here to help is the public transport friendly masterpiece: Raven.

Vilnius, Lithuania -- (ReleaseWire) -- 10/18/2016 --It is no secret that manual transportation can be faster than automotive vehicles in dense city environments. In fact, a 2015 study found that many cities, including New York City, Los Angeles, and Pittsburgh, contained areas with single digit average speeds. (1) To help the public function in this growing world is Citybirds' latest and lightest scooter: Raven. Raven brings an unparalleled blend of form and function, featuring an elegantly minimal aesthetic alongside an accommodating mobile design. The foldable scooter is so compact it is almost perfectly linear in its simplest form, allowing Raven to be comfortably and naturally carried through public transport, in a car, or into the office.

The design strength of Raven is truly breathtaking. The scooter features an innovative gap in the deck of the scooter, enabling the deck and bar of the scooter to interlock when folded. The folding mechanism is designed such that all a rider has to do is press foot pedal, removing the awkwardness of a traditionally folding scooter. Additionally, Raven's handles fold down around the bar, condensing the entire scooter into an absolute stick. To make the scooter even more practical, there is a small curve in its folded form, perfectly designed so a user can easily sling Raven over their shoulder.

This practicality is only augmented by the quality of Raven's construction, for the body of the scooter is built from lightweight carbon fiber. This high-quality material allows Raven its sleek, yet strong structure that is light enough to perch on a shoulder but strong enough to withstand impact. Sadly, there is one aspect holding back Raven: funding. To remedy this issue the Citybirds team has launched a crowdfunding campaign. Within the campaign, supporters can pre-order Raven for a early-bird price, received a Raven T-shirt, and support the Citybirds movement. With the help of readers Citybirds hopes to bring the Raven to the world, sparking a whole new breed of scooters.

About Raven
Raven is Citybirds' latest scooter and it has received considerable praise from organizations like Red Dot, Geneva Inventions, and Core77. Citybirds is proud to be developing such an innovative step in personal transportation. Citybirds itself holds a wealth of experience in developing scooters. Two years ago Citybirds had the pleasure of conducting a successful crowdfunding campaign for Raven's predecessor, Pidgeon. Today Citybirds is back and ready to innovate with a lighter than ever construction and swave design. 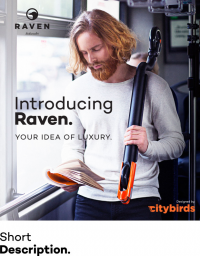