Doha, Qatar -- (ReleaseWire) -- 12/19/2016 --In the scheme of things, the current rendition of movie theatres is embarrassingly outdated. Historically, this style of movie theatre has been around since Nickelodeon's theatre, which opened in 1905. Even before that, there were opera houses, which are the design inspiration for the style of movie theatres today. These sort of movie theatres are inherently flawed by nature of being public places of gathering. Some people simply do not mix well. For example, a chronically weeping baby is no good when it is sat in a room of people trying to appreciate a movie. To remedy this issue and issues like these, is Roraa.

With Roraa, the public can watch movies wherever they please, removing the annoyance of sitting in a rambunctious crowd. What's more is that users are able to watch these movies on whatever device they please, ranging from a cell phone to an internet-enabled tv. Other companies have attempted to accomplish this goal to little success, but Roraa has identified the common mistake: illegitimacy. Other services that have launched support user-uploaded content, which is simply awful. This content is often grainy, inaudible, and an act of illegal piracy. In contrast, Roraa plans to conduct deals with major studios in order to support high-quality picture and sound without pirating. As a side benefit of coordination with the studios themselves, Roraa is able to release movies to its platform the same day that they are shown in physical public theatres.

In fact, Roraa has already reached out to major studios like Universal Studios, Fox and Paramount Pictures, and all of these studios expressed excitement for a new platform to display their films on. With Roraa, no one with have to suffer the intolerable annoyances of a crying toddler or unreasonable snack prices. To ensure that the experience is as pleasant as possible, the platform is being designed with a minimalistic, low-profile style, because movie watching should be about the movie, not the platform.

To land these deals and construct the platform, Roraa needs funding. To help in this effort, the Roraa design team has launched a crowdfunding campaign on Indiegogo. Patrons will be rewarded with anything from exclusive swag to an engraving permanently etched a wall of Roraa headquarters. With the help of readers, going to the movies will be a better experience than ever before, and users will be able to watch from the comfort of their own homes. 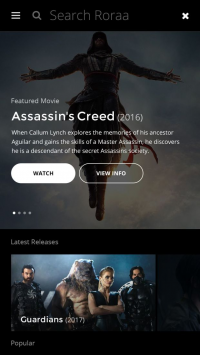