As hobby and tabletop games see a revival, one budding company has looked to satisfy these demands with a creative card-based battling game named Siege.

Lehi, UT -- (ReleaseWire) -- 10/10/2016 --The hobby game industry has recently been evaluated at over 850 million dollars (*), showing the rapid growth that is telling of tremendous customer demand. Fans are dying for games not as complex and time consuming as Dungeons and Dragons, while offering a higher level of depth than traditional playing card games. This is where Siege fills its niche. This game of medieval mayhem is ideal for veteran tabletop players as well as eager novices. The game features a play style reminiscent of the 2007's Castlewars, a once-popular online game, but Siege goes far beyond Castlewars in complexity and skill cap. Players must construct defenses, develop attackers, destroy opponent structures, and more in order to push through and pave a path to victory.

The game itself revolves around defending seven wall pieces with five card types, garrison cards, defense cards, mercenaries, enchantments, and weapon cards. Players can hold as many cards as they have wall pieces, building a fun, high-risk snowball mechanic into the game. Players can fortify their walls in all sorts of ways: pots of oil, moats, and drawbridges included. But worry not, for every defense there is an equally viable offensive counter, such as catapults, tunnels, and more.

Additionally the attack and death mechanics are particularly innovative and interesting. Many attacking cards have different, even adverse, effects depending on a coinciding dice roll. In this way players can be rewarded and punished for playing it safe and taking risks. As a side benefit, these roll-based mechanics add a comeback tool into Siege. And because the game allows up to four players, the designers built in an interactive death mechanic, where defeated players roll to affect other players, removing cards, and adding a level of chaos to the game. Sadly there is one aspect holding final production back: cost. To remedy this issue Siege has turned to crowdfunding in the hopes of amassing enough funding to complete the first round of mass production. Backers will be given copies of the game alongside exclusive wallpapers and posters. With the support of readers Siege will soon entertain the masses, rattling the tabletop gaming world.

About Siege
Siege was masterminded by Ken Bogedahl, chemical engineer and 20-year dabbler in game design. The first prototype of Siege was created in 2010 and was truly sticks-and-stones. The original version was constructed of handwritten card descriptions taped onto standard playing cards. Since then Siege has been graphically designed by Sage Turk, forming the duo known as TB Games. Siege has come a long way and is excited to roll out next March. 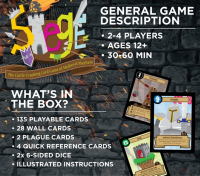 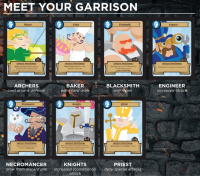 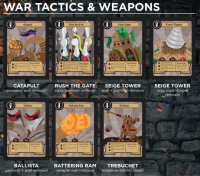 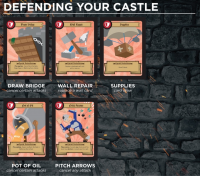