Introducing SIGMENT, the Safe and Smart Luminous Vest for Cyclists

As the environment becomes more of a concern, many are turning to bicycles for transportation. Today an illuminated vest named SIGMENT is here to help cyclists everywhere enjoy safer rides.

Espana, Spain -- (ReleaseWire) -- 04/24/2017 --Cities today are putting out more emissions than ever, and automotive pollution is the primary source of this urban pollution. To help combat this problem, many city dwellers and others are learning that using bicycles as transportation is both good for the environment and the body. What's more is that those who make the switch to bicycling find that they no longer spend money on expensive cab drivers or have to waste gas sitting in traffic. And for those in especially traffic-ridden cities, riding a bike to work or other locations can even be a faster commute. Sadly, there stands one problem in the way of making bicycling the transportation of the future: safety. Every day over one hundred cyclists die due to collisions while cycling. Today an illuminated vest named SIGMENT is here to help combat this problem with added safety features.

With SIGMENT, riders no longer have to conduct the traditional hand signals of raising their hands to the left and right. No only are these hand signals not visible at night; they can throw off the balance of the rider and cause accidents. With SIGMENT, riders will have a LED-illuminated signaling system attached to the back of the vest. This system automatically lights up brake lights when it senses the bike slowing and can be manually activated via a handlebar attached remote. The remote can be operated with just one finger and can be used to signal left, and right turns as well as activate emergency lighting. This back panel of lighting can be adjusted in angle to adapt to the posture of every rider, and the panel comes with a retractable 'hood' to amplify the brightness of the signals and make them visible even in the day. Thanks to the reflective material of the 'hood' each signal on the back panel is amplified to five times its strength.

In addition to the back panel of LED-signals, a variety of safety lights rest on the shoulders and chest of the rider. This remote can be detached to prevent theft while the bike is parked. Sadly, producing such a smart illuminated vest is no easy task. To produce the product to a high-quality, the SIGMENT team has launched a crowdfunding campaign on Kickstarter. Through this campaign, supporters can pre-order the device at a discounted price while supplies last. With this support, SIGMENT hopes to save lives everywhere while reducing automotive emissions. 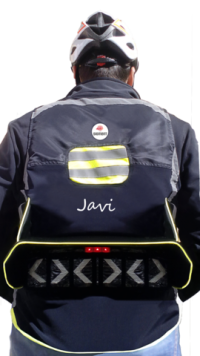