In the modern world, environmental issues are at the vanguard of public concerns. Here to offer commentary while enthralling readers is Matt Riva’s latest novel titled Stone Ghost.

Vancouver, BC -- (ReleaseWire) -- 03/07/2017 --There are a variety of environmental issues that have the attention of the press. Climate change, air pollution, and biodiversity loss and more all consistently make it into the eye of the public. However there stands one equally pressing issue that is underrepresented: the lack of fresh water. Fresh water is essential for human life, yet only three percent of the earth's water is fresh water, and less than one percent of this water is accessible as much of the other fresh water is locked up in icebergs, glaciers, underground caves, or living organisms. In fact, fresh water has become so scarce that many economists are dubbing water to be blue gold, paying homage to the term black gold for oil. To take a look at just how pressing this issue of the scarcity of fresh water is while providing a fascinating set of plot lines is Matt Riva's latest novel: Stone Ghost.

In Stone Ghost, there is a minuscule amount of fresh water left on the planet, and the most reliable source of fresh water are the few melting glaciers that remain. As a result, tensions are on the rise, class wars are waged, and more. In search for peace and safety, In the midst of this chaos, an old man and his dog attempts to escape by traveling to a far away, rural location in the mountains. There the world is serene, at least for a moment. The old man soon learns that survival would not be so tranquil as he perfects his sniping skills.

Throughout the course of this novel Riva touches on some of the more core aspects of life including a class tensions, love, mystery, and more. Sadly, Riva does not currently have the funds to support himself while he finishes the novel. To remedy this issue he has launched a crowd-funding campaign on Kickstarter. Those who contribute to the campaign will be rewarded with anything from parts of Riva's first handwritten draft, to a copy of the final novel, to a spot in the book as a contributor. With the help of readers, Riva aims to give the public insightful environmental commentary while entertaining the masses.

About Matt Riva
Matt Riva began his creative career by discovering his improvisational talents at an early age. This skill soon bled into storytelling, which soon became story writing. Today, Riva is an accomplished author and a dabbling musician who is excited to share his work with the world. 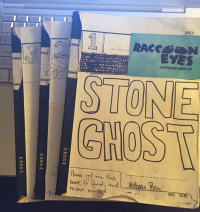