Introducing the iDockAll 2, a True One Handed Charging System

In today’s busy world, any opportunity to increase convenience should be grabbed with two hands. Thankfully, the new iDockAll 2 from Wiplabs, only needs one.

New York, NY -- (ReleaseWire) -- 11/16/2016 --Smart devices are everywhere in this world of developing technology. Smartphones alone make up over three hundred and forty million sales in just the second quarter of 2016. * With this gargantuan amount of devices floating around in the public, everyone can understand the inconvenience caused by having to plug and unplug devices with two hands, one on the charging cable and one on the device. As a result a multitude of manufactures have produced docking stations to charge devices with a bit more ease, but none of these producers have been able to produce a truly one handed docking system. This is where the iDockAll 2 fills its niche. Through practical design and material innovation the iDockAll 2 allows any user to charge any device with unprecedented ease.

The system itself is made of a weighted aluminum stand, a supportive back, a custom-made charging plug, and a microporous adhesive surface underneath. The heavier stand adds a bit of stability to the device, keeping the plug stable while electronics are connected and disconnected. The adhesive surface firmly secures the dock, can be cleaned and never leaves any residue. It will fasten to any flat surface. That extra touch of magic in the iDockAll 2 lies in its custom charging cable. The device being charged can be lifted out of the docking station and the cable will remain attached, or the device can be tilted back against the supportive stand and the cable will detach. This makes it one of the only docks that supports use while charging.

Kevin Wippermann and Nathalie De Clercq are the founders of Wiplabs and believe that they have created a dock that will really satisfy any smartphone or tablet user, Apple or Android. 'It's works perfectly for my iPhone. The luxury of having two hands free is just addicting. I wish all hotels had it because I miss it when I'm traveling!' says Ms. De Clercq.

A great idea like this design is only half the battle, for the design needs to be properly made into the reality. Thus, in the construction of the iDockAll 2, the production team spared no expense. The stand is made of a single block of anodized aluminum, giving the docking station durability. The adhesive bottom is made of a microporous material, and because the adhesive is structurally based rather than resin-based like glue, the adhesive lasts indefinitely. As a side benefit, these design choices allow the iDockAll 2 to blend in with modern Apple products.

The iDockAll 2 has been made available for pre-order via a crowdfunding campaign at a massive, twenty-nine dollar discount. The team at Wiplabs hope that the iDockAll 2 will forever change the way the world charges its mobile devices.

To learn more about the iDockAll 2 visit the Kickstarter campaign page. 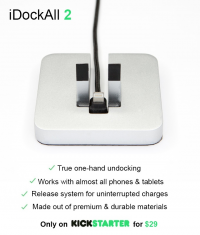