The latest nano technology wonder for the Household segment.

Erkelenz, Germany -- (ReleaseWire) -- 12/04/2018 --A team of talented engineers and entrepreneurs that are working under the roof of RageGear have developed a unique titanium coating for kitchen knives that consists of two layers of nano particles.

Yukimura Naomi introduces this new technology to households and professionals alike. Which provides dramatic improvements to the knives cutting ability by reducing adhesion via a lotus effect.

This lotus effect is enhanced by a unique mirror polishing that increases the lotus effect even further. Therefore the knife practically slides through cuttings.

Combined with a newly developed handle was inspired by the Japanese orchid and the Samurai tradition. This not only unique looking handle also provides an ideal grip when working with the Yukimura Naomi knife.

RageGear is launching a crowdfunding campaign on the popular crowdfunding platform Kickstarter to fund the first production run of Yukimura Naomi which will be available as a traditional western chef's knife, traditional Japanese Santoku and Nakiri knives as well as a paring knife.

To find out more about the campaign visit www.ragegear.eu where RageGear also accepts pre-registrations.

About RageGear
RageGear is a new brand for high performing products in various categories. Its international team of engineers and entrepreneurs is committed to driving innovation forward and bringing exciting new technologies and products into everyones hands.

This press release is being circulated under agency agreement by Youkauf Deutschland UG. 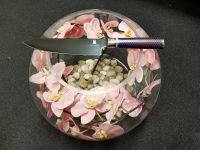