Introducing Would You Pick, a Dark Humor, Card-Based Party Game

Every party could use something reliably funny to default to. Would You Pick is just that. Structured like the common verbal game of would you rather, Would You Pick brings a touch of dark humor with a set of one hundred hilarious situations.

Montreal, QC -- (ReleaseWire) -- 04/26/2017 --A good laugh is never unwelcome at a party. For this reason, many friend groups love playing the classic games of would you rather, truth or dare, and others. However, there are only so many truth or dare questions or would you rather situations that a friend group can come up with on their own. What's more is that some people are simply too bashful to bring up conversations through these games for fear of offending others. Today a new card game named Would You Pick is here to break these barriers and explore new realms of dark humor with a variety of hilariously improbable situations that are sure to strike up some interesting conversations.

The game itself revolves around a set of one hundred cards. Each card is marked with a point value and a bit of text describing an unlikely scenario that ranges from a smidge ridiculous, like combining rabbits and chickens into egg-laying rabbits, to outright rude, like being released into the Sahara Desert naked with nothing but a bottle of sunscreen. When the game begins, the first player draws two cards and reads them aloud. Then all players begin to debate over which card the drawing player should pick. The picker makes his or her choice and keeps the card he or she has selected. They then give the other card to the person they feel made the funniest, best, or simply most entertaining argument. This process continues until a player collects 10 points and becomes the ultimate Would You Pick winner, or until all players are satisfied with the game. Additionally, there is a casual party game mode without a point system, an elimination game mode, and a game mode that results in filtering down the one hundred-card deck to just one least picked card.

With this sense of dark humor packed into each card and a variety of cards to play with, Would You Pick is sure to bring a fun-filled twist to any scenario. To mass produce these cards, the Would You Pick team has launched a crowdfunding campaign on Kickstarter. Through the campaign page, those interested can support the campaign by pre-ordering Would You Pick at a discounted price while supplies last. With this support, the team behind Would You Pick is excited to see the game of their friend group come to life as the life of every party.

About Would You Pick
Would You Pick is the brainchild of two friends, Max and Pascal. After a vacation and a bit too much alcohol in the Dominican Republic, the two thought up a variety of funny scenarios to bring back home to their friends. This was the beginning of Would You Pick, the game that Max and Pascal are creating to bring to parties everywhere. 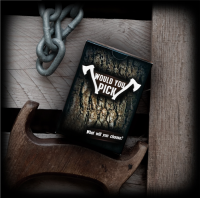