Invisible Illness Awareness Week reaches out to the chronically ill with a photo contest that emphasizes how, regardless of the illness we may have, we can still make choices. What do you choose?

San Diego, CA -- (ReleaseWire) -- 08/28/2013 --Invisible illness is not a choice, however those who live with a chronic illness can make choices that impact their lives. This is the message of the 2013 Invisible Illness Awareness Week campaign, "I choose to . . ."

Invisible illness is not a choice, however those who live with a chronic illness can make choices that impact their lives. This is the message of the 2013 Invisible Illness Awareness Week campaign, "I choose to . . ."

It is estimated nearly 1 in 2 Americans live with a chronic condition* and most of them have invisible symptoms. It's easy for bitterness to grow when one feels like no one understands the invisible pain and depth of the emotions behind his or her physical illness.

Anyone can upload photos on the event's Facebook page page and then encourage others to vote on the photos. The one who has most votes on September 15 will win a Kindle Fire. To be entered to win the caption must include the words, "I choose to" and have the hashtag #invisibleillnessichooseto.

Choices can range from the silly to the serious. For example, "I choose to set healthier boundaries" or "I choose to snuggle with my dog when I am in pain."

Lisa Copen, who founded the week in 2002 says, "This week is a time for those with illness to feel their pain and struggles are validated, as well as learn new valuable skills and be encouraged." Although a virtual conference won't be held this year as in some years past, all of the seminars are still available to watch. "The topics are timeless," says Copen. "The workshops speak of relationships, the emotional changes we deal with, marriage, working, parenting and many more."

Invisible Illness Awareness Week is held annually in September and includes opportunities to blog for the cause, do a meme, share tweets and videos, and other advocacy activities. Chat sessions will be held at the Facebook page during September 9-13.

For more information sign up for daily updates at InvisibleIllnessWeek.com 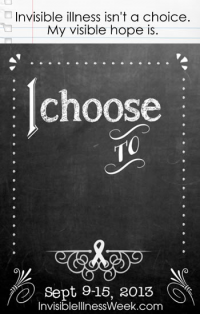 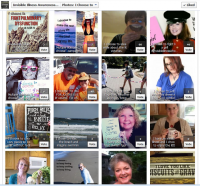