iSunCLOUD Is the Airbnb for Unused Computer Storage Space, Allowing Users to Rent out Their Hard Drive in the Cloud

New York, NY -- (ReleaseWire) -- 01/07/2016 --iSunCLOUD has introduced the next generation of the sharing economy, by bringing to life their innovative new marketplace platform which allows users to rent or rent out their unused computer storage space on the cloud.

Instead of renting storage space from multi-billion dollar companies such as Apple or Dropbox, which hold users' data in a centralized server and vulnerable to security flaws, iSunCLOUD allows users to rent out their own extra storage on their computer or any other device with storage functionality to people who need it. As with similar shared economy platforms, users can earn "rent" just as easily as they would on Airbnb.

To get users started immediately, the company is introducing alongside their iSunCLOUD hardware the iSunNODE. A fully optimized and ready hardware system that has been specifically optimized and engineered for the iSunCLOUD platform. It allows users to quickly access the iSunCLOUD platform and drives more priority traffic once they are on. The system is also able to remain on 24/7 while consuming minimal power. The iSunNODE is not only a fully loaded hardware that comes optionally equipped with or without hard drive space, it also allows users to use the system as a personal server, a private cloud, and a fully featured media consumption center. Plugging the iSunNODE into your TV allows users to seamlessly stream 4k videos directly to the system.

The iSunNODE Clean Model without a hard drive starts at $99 on Indiegogo for early adopters with premium models available at an additional cost.

About iSunCLOUD
iSunCLOUD was founded in late 2014 with a shared passion for creating the world's greatest decentralized cloud network. Sensing the growing need for cloud storage and privacy concern, the team set out to create what is now known as iSunCLOUD. With storage space growing larger all the time, the team realized the amount of excess unused storage space on the market that users should be able to share as simply as they would any other unused asset in the sharing economy. 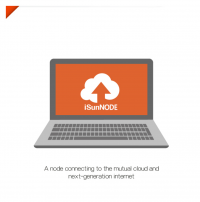