A television commercial for a shoe repair shop in Durham, North Carolina, features young Italian -American actor Gianlorenzo Albertini, who gets the girl—along with his pair of “like new” shoes.

Durham, NC -- (ReleaseWire) -- 05/12/2016 --When meeting the girl of your dreams, don't get tripped up by old shoes. That's the theme of a new television spot featuring Italian-American actor Gianlorenzo Albertini, cast as the gently humorous romantic lead in the commercial for Wyatt and Dad Shoe Repair Specialists in Durham, North Carolina.

As Skip, Albertini is strategically positioned when Tania Serrano (as the girl of his dreams) falls for him—literally—at a backyard barbecue. A "wardrobe malfunction"—in the form of a dilapidated pair of dancing shoes—costs Albertini the chance to catch the woman he's interested in. Instead, he has to watch her tumble into the arms of another.

To the rescue come the shoe repair experts at Wyatt and Dad Shoe Repair Specialists. Their 20 years of experience repairing and resoling shoes allow Skip to dance his way to a happy ending with his new lady friend.

The commercial was shot in Los Angeles by director Nick Wyatt—son of Wyatt and Dad owner Rick Wyatt—with cinematography by Aric Coppola. "Lorenzo's effortless likability and dedication to his craft made working with him a distinct pleasure," said the director. "That doesn't come around all too often in this industry." Nick and Albertini had originally met on a Los Angeles film set where they were both working. When it came time to write and cast a television spot for his family business, Albertini was Nick Wyatt's first choice for the lead character.

Albertini enjoyed playing a romantic lead, and also enjoyed acting in a TV spot in which human beings are the focus. "Many times in a commercial shoot, the product is really the star," says the actor. "For example, a vodka bottle might be the 'lead character' in a shoot. In this instance, we were portraying the benefits of the shoe repair service to our characters."

The actor continues, "This was much more of a comedic role than I've played in any of my other projects this year—naturalistic, but still comic. We wanted to make the acting more real and relatable to the viewers."

The spot, "A Little Backyard BBQ," will be released in two lengths—one minute, and thirty seconds—and is expected to air on local television in the Raleigh/Durham area starting in June.

In addition to this commercial, the actor has several film and stage projects in the works in 2016, including "One: A Hip-Hop Musical," which will receive its first full staging in Los Angeles, and the action thriller feature film "Bloody Hands," which is scheduled for release this December.

About Gianlorenzo Albertini
Italian-American actor Gianlorenzo Albertini, 25, is native of Naples, Italy. He has film and theatre acting credits in both the United States and Italy. In addition to his work as an actor, Albertini is an abstract painter, composer, and Conservatory-trained classical guitar player. 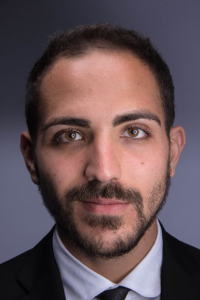 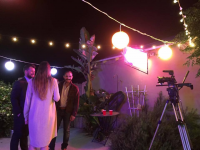