It's All Business when Representing the Argo ETV Product Line

New Hamburg, Ontario -- (ReleaseWire) -- 06/27/2013 --When you’re in the business of renting out equipment, there’s no higher compliment than a local market that calls for your product by name. This is a common bond for two shops in two very different parts of Canada.

In the heart of northern Ontario’s rugged mining country, Timmins Rent All was just starting to evolve from primarily a tool rental shop into the supplier of larger equipment about 12 years ago. “And then one day we got a phone call specifically for an Argo,” recalls Al Laporte, “so we looked into it, bought a used one, put it on rental, and did really well with it that first year.”

The apparent opportunity for increased business intrigued Laporte. As it turned out, the local authorized Argo dealership was coming available. An authorized Argo dealer and rental house since 2001, Timmins Rent All today is not only a benefactor of, but also a leading contributor to the Argo product line. Laporte, now an owner and General Manager of Timmins Rent All, serves on the commercial development team for Argo’s parent company, Ontario Drive and Gear Ltd. (ODG) of New Hamburg, Ontario, Canada. By responding to customer requests in the field, Laporte has been instrumental in the development of new complementary products from Argo. These include crane and flatbed platforms for the various Argo carriers.

Richard Wharmby is an owner and rental coordinator at Expedition Rentals in Edmonton, Alberta. He says, “Customers ask for them by name. It’s not ‘What can I use?’ It’s ‘Do you have Argos?’ And most of the time, it’s ‘How many do you have on hand? I need them today or tomorrow!’ ” His store has rented out the Argo vehicles since 2008, but has already grown the fleet to 20-plus units. “Every year, we seem to increase by five or six. For us, the more snow there is in the winter, the better it is for Argo rentals in the spring and summer,” he explains. “In Alberta, there’s enough muskeg up north that it doesn’t ever really dry up in some spots, so our summers are busy with Argo rentals. It’s kind of an industry standard here that oil and gas companies and surveyors need Argos for the sort of work they are doing in the summer.”

“That is the time of the year when it’s just easier to go out and check well sites with an Argo than it is with anything else. A quad is just going to get stuck in the mud, and the Argo just drives over the top and gets out there,” says Wharmby. “Very often if they go out with quad vehicles one week, they’re back to us the next week for Argos, because everyone else has an Argo and is moving right past them in the muskeg.”

What an Argo may give up to a quad in flatout travel speed, agree Laporte and Wharmby, is more than made up in its ability to go through and come back from the most extreme conditions.

A customer may know he wants a flotation-friendly Argo, but that doesn’t necessarily mean any Argo will do. This, says Laporte, is where the attentive, educated staff of a dealership or rental house will turn the risk of carrying rental capital equipment into a successful venture.

If the Argo is needed primarily to move people, then a Frontier or HDi model will often suffice; if cargo is to be moved, then a heavy-duty XTI or Centaur model will be recommended. Optional flatbed, box, crane and augur platforms give customers more ways and more reasons to take the ETVs into the field. “As soon as you get into the more aggressive, commercial type of work,” says Laporte, “then that’s where the new XTI and Centaur come in.”

For northern Ontario mining and forestry companies who are moving people to jobsites or engaging in exploration, construction or maintenance, “the Argo has been giving them a great option when it comes to crossing very soft terrain and going across bodies of water,” says Laporte. In northern Alberta, surveyors use Argos to check well sites, environmental companies use Argos to safely reach monitoring sites, and oil and gas companies even use Argos to transport community stakeholders for onsite scoping expeditions as part of local relationship management, says Wharmby. “Out in the bush, when you hit a stream, it’s easier to cross that stream in an Argo than it is to take a quad and then bring your helicopter in to lift the quad over the stream,” he says. “This is a much cheaper alternative for those companies. When you are out in the middle of nowhere, that helicopter expense is high.”

“And the Argo is safer, as well, for them,” says Wharmby. “If they choose an Argo, at least they are going to float across the stream, rather than risking sinking with a quad.”

With their long history and numerous contacts in the Timmins-area industrial community, Laporte and his Timmins Rent All staff have “learned over the years on exactly who to rent to,” he says. “Obviously, you don’t want to rent these vehicles to just anybody. We deal mostly with businesses that we know, that we can trust, that we have good rapport with, and that we know what they’re going to be doing with the units basically.”

It boils down to reducing the risk of renting out capital intensive equipment. “These vehicles are almost always on tracks when they go out on rental,” says Laporte. As such, Timmins Rent All plans annual operator and technical training sessions for both staff and customers. Laporte’s advice to prospective Argo dealers and rental houses is, “Make sure that the operators have some training on how to operate this new equipment, and that they have a maintenance schedule or checklist in their hand when they go out. You don’t want to leave care of the vehicle to chance!”

In northern Alberta, seeing – and experiencing – is believing for Wharmby’s customers.

Marketing the Argo product line “is just a matter of the basics: Having a unit on display and possibly being able to take customers out to some sort of wet area to show them the capabilities in the mud and muskeg is essential,” he says. “Most of the time, after people experience the Argo once, they realize its capabilities and want to use it again. Hands on knowledge is the best.”

Expedition Rentals uses nearby recreational ATV areas to introduce customers to Argos. “Taking them out and showing them what sort of hills they can climb and how much water they can go through is an eye-opener to them,” says Wharmby. For additional awareness, he endeavours to connect with equipment managers. They may be responsible for renting pieces for their respective company’s exploration and service workers, but they may not normally have an opportunity to put an Argo to the test personally. “They take it out for half a day,” he says, “and they come back saying, ‘Wow, you know, this Argo is even better than I thought.’”

Key, too, according to both Wharmby and Laporte, is ensuring the Argo units in their respective rental fleets are properly equipped, with tracks, and available with the correct attachments and options. As a member of ODG’s commercial development team, “it’s exciting to see the product line moving forward,” says Laporte, “and to have more and more add-on solutions for these vehicles.” The new eight-wheeled Argo trailer is a good example, he says, of a product line accessory that leverages the safe, environmentally-conscious characteristics of the actual Argo vehicle by using the same lightweight, enclosed body with the same axles, bearings, tires and other components. Timmins Rent All swaps out platforms, tracks and other attachments as required. With the Argo’s standardized mounting system, most attachment installations take 30 minutes or less.

For Laporte, an avid snowmobiler, the winter of 2013 has been a celebration. “We’ve got so much snow, it’s unbelievable. We haven’t seen this much snow probably in 18 years.” For Wharmby and Laporte, businessmen, the mud to follow is prime rental fodder for their Argo fleets. “Oh, we’ve had lots of snow this year,” Wharmby says with a laugh. “It’ll be a good summer for us.” 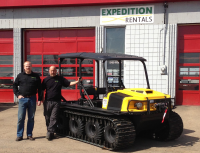 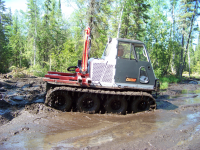