The Tom Gregory Collection: The Finest Collection of Hollywood Signed Photographs Ever Assembled to be auctioned

Boston, MA -- (ReleaseWire) -- 12/14/2016 --A James Dean East of Eden portrait is among 250 Hollywood Signed Photographs in the Tom Gregory Collection currently up for sale at RR Auction.

The incredible vintage semi-glossy photo of Dean on the set of East of Eden, signed and inscribed in purple fountain pen, "To Cindy, With my best wishes, James Dean."

Leaving New York for the bright lights of Hollywood, Dean embraced the part and turned in one of cinema's great emotional performances to earn an Oscar nomination for Best Actor in a Leading Role. He was nominated posthumously for the 1956 Academy Awards, the first official posthumous acting nomination in Academy Awards history. East of Eden was the only film starring Dean that he would see released in his lifetime.

Portraying him during the production of this iconic film, this is a remarkable photograph in both size and content. Accompanied by a letter of authenticity from the James Dean Memorial Gallery.

"Dean was only 24 when he died in a car crash— so signed photos are rare in general, with oversized examples exceedingly so," said Robert Livingston, Executive VP at RR Auction.

Additional highlights include such rarities as an amazing vintage matte finish portrait of Greta Garbo inscribed to Eva von Berne, an Austrian actress brought to Hollywood as the next 'Garbo'.

A Hollywood collection would not be complete without reference to the 1939 classic The Wizard of Oz. The collection boasts the incredible rarities of portraits of both Glinda and The Wizard signed in character.

The Horror genre is represented by choice examples that include: Lugosi as Dracula and Karloff and Clive in character from Frankenstein.

For information, visit the RR Auction website at www.rrauction.com. 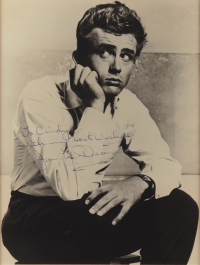 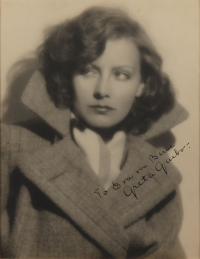 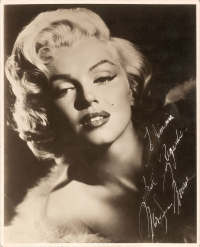