Indianapolis, IN -- (ReleaseWire) -- 03/14/2016 --As inspirational stories go, this is a doozy. James Hinchcliffe is a kid from Canada who made it in the big time and became an IndyCar driver in the U.S., only to almost lose it all in 2015 when he had a near fatal crash.

James is being called "The Comeback Kid" in Indy Racing as he hit the track again today and qualified in the top ten for the Firestone Grand Prix IndyCar Series. James will be racing tomorrow in St. Petersburg.

It's his first race back behind the wheel and James seems excited and fit. His recovery was amazing and his attitude is the stuff of legends. His sunny disposition shone brightly today for the throngs of fans who waved, threw kisses and reached out to touch the driver.

On January 10, 2012 it was announced that Hinchcliffe would succeed Danica Patrick as the driver of the No. 27 Go Daddy.com car for Andretti Autosport. On October 7, 2014 it was announced that Hinchcliffe would join Schmidt Peterson Motorsports for the 2015 season and drive the No. 5 car. He moved to Schmidt Peterson Motorsports and won his first race with the team in the second race of the year in New Orleans.

Now, he's the crowd's darling and everyone is watching him. James is working with performance expert, Terry Lyles, PhD, using biotelemetry to gauge his heart rate, respiration and other vitals while he is driving during the IndySeries. Fans may actually get to see exactly how fit James is doing during the race when his biotelemetry is broadcast later in the season.

For now, we'll all have our attention on his smiling face and golden Honda car, sponsored by ARROW and GoDaddy among others.

About Schmidt Peterson Motorsports
Schmidt Peterson Motorsports (SPM) was established in 2001 and is owned by former IndyCar driver Sam Schmidt and Canadian businessman Ric Peterson. Schmidt was paralyzed (quad) in 2000 after an accident during testing at Walt Disney World Speedway in Orlando, Fla. SPM fields cars in the Verizon IndyCar Series, including the Indianapolis 500, and the Indy Lights Series presented by Cooper Tires. SPM is the most successful team in Indy Lights Series history with sixty-five race wins and seven championships. In addition, SPM won the coveted Indy 500 pole position in 2011, and has won five Verizon IndyCar Series races between 2013 and 2015. 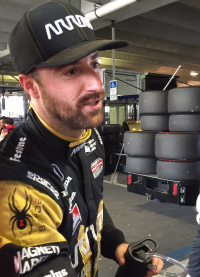 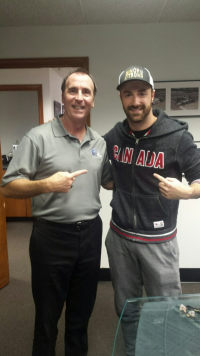