New York, NY -- (ReleaseWire) -- 01/22/2021 --Producer Mark Cortale has announced that seven award-winning stars of the stage and screen will join the January and February 2021 line-up of The Seth Concert Series, the live weekly series based on Seth Rudetsky's international Broadway series that began at The Art House in Provincetown ten years ago. Jessica Vosk, who starred most recently as Elphaba in Wicked on Broadway, will make her series debut on January 24. Married stars Jeremy Jordan, Tony nominee as Jack in Newsies on Broadway and star as Winn in CW's Supergirl, and wife Ashley Spencer, who has starred on Broadway as Sandy in Grease and Amber in Hairspray, perform together on January 31. Christy Altomare, award-winning star as Anya in Anastasia and Sophie in Mamma Mia! on Broadway, makes her series debut on February 7. Married stars Stephanie J. Block, Tony Award winner last year for The Cher Show and Tony nominee for The Mystery of Edwin Drood and Falsettos, and husband Sebastian Arcelus, star of Netflix' House of Cards, CBS TV's Madam Secretary and Broadway's Elf - who had previously been scheduled for the January lineup - have moved in the lineup in order to perform together on Valentines Day, February 14. And Santino Fontana, Tony Award winner last year as Michael Dorsey in Tootsie, Tony nominee as Prince Topher in Cinderella on Broadway, and star of CW's Crazy Ex-Girlfriend makes his series debut on February 21. For additional information and to purchase tickets, please visit thesethconcertseries.com.

Each weekly show premieres live on Sunday nights at 8:00 PM EST with a one-time rebroadcast on Mondays at 3:00 PM EST. Tickets are available at thesethconcertseries.com for $25.00 each. As a premium, VIP tickets that include "behind-the-scenes" access to the artists' soundcheck are now on sale for each of the January and February lineup's stars. Many of the series' concerts will be available On-Demand for a limited time after each weekly live premiere.

Also, a Student Discount is now available for all shows announced in The Seth Concert Series, providing an additional 40% discount to registered students with a .edu email address by using the code STUDENT when signing up for a BroadwayWorld account.

Jessica Vosk (performing January 24) was recently seen on Broadway in Wicked after having spent a year playing Elphaba in the national tour. She most recently starred in the NYC Ballet Jerome Robbins tribute Something to Dance About, directed by Warren Carlyle, and re-created the role of Fruma Sarah in the most recent revival of Broadway's Fiddler on the Roof. Other Broadway: Finding Neverland, The Bridges of Madison County. She starred as Anita in the Grammy-nominated San Francisco Symphony West Side Story.

Jeremy Jordan (performing January 31) recently starred on Broadway opposite Kerry Washington in the provocative new play, American Son, and then reprised his role in the Netflix film adaptation of the show. Next up is his lead role as seminal record producer and Casablanca Records founder Neil Bogart in the feature, Spinning Gold, and starring as Seymour in the New York production of the iconic Little Shop of Horrors. Other films include The Last 5 Years opposite Anna Kendrick, Joyful Noise with Queen Latifah and Dolly Parton, and Newsies. His TV work includes series regulars on CW's Supergirl, NBC's Smash and Disney Channel's Tangled, and guest starring on The Flash, Elementary and Law and Order: SVU. Other Broadway shows include his Tony-nominated starring role in Newsies, playing Clyde in Bonnie & Clyde (Theatre World Award), starring as Tony in West Side Story, and playing leads in Rock of Ages and Waitress. Follow @JeremyMJordan for concert and music updates.

Ashley Spencer (performing January 31) was born and raised in Canton, Ohio. She began taking dance lessons at the age of four and later became a member of the Canton Ballet Company. After graduating high school, Ashley moved to New York City to pursue her dreams as a Broadway actress. Her first job was a touring show called Barbie Live in Fairytopia. She then auditioned for Grease: You're The One That I Want!, a reality show casting the roles of Sandy and Danny in the Broadway revival of Grease. She went on to star on Broadway as Sandy, as well as Amber in Hairspray, Sherrie in Rock of Ages and one of three Divas in Priscilla: Queen of the Desert. She appeared regionally in Les Miserables, The Producers, Curtains and Crazy For You.

Christy Altomare (performing February 7) originated the role of Anya in the Broadway production of Anastasia for which she received the Theatre World Award and was nominated for an Outer Critics Award and a Drama Desk Award for lead actress in a musical. She made her Broadway debut playing the role of Sophie Sheridan in Mamma Mia!. Off-Broadway, Christy portrayed the role of Sue Snell in MCC's revival of Carrie the Musical. Christy can be heard in the cast recordings of both Anastasia and Carrie. She toured the country in the first national tour of Spring Awakening, playing the role of Wendla Bergman. Regional credits include Jerusha Abbott in John Caird and Paul Gordon's production of Daddy Long Legs, Guinevere in Camelot at Drury Lane in Chicago, and most recently, Nellie Forbush in South Pacific at the Aspen Music festival. Christy is a graduate of the Cincinnati College Conservatory of Music. Along with her passion for musical theater, she is a songwriter/ recording artist, currently working on a number of projects and completing a new album of original music called Wandering Bird.

Sebastian Arcelus (performing February 14) was most recently seen as Jay Whitman on the long-running CBS hit series Madam Secretary opposite Téa Leoni. Arcelus is also known for his memorable role as Lucas Goodwin on the critically acclaimed Netflix original series House Of Cards and recently starred in a recurring role on the second season of HBO's The Deuce, created by David Simon and George Pelecanos. Additional television credits include stints on HBO's The Leftovers and on FBI and Person Of Interest for CBS. On the big screen, Arcelus was most recently seen in the M. Night Shyamalan feature Split with James McAvoy. He was featured in the Universal Pictures hit Ted 2 opposite Mark Wahlberg and directed by Seth MacFarlane. He also starred in The Best Of Me (Relativity) opposite Michelle Monaghan and the independent feature The Last Day Of August, for which he also served as co-producer. On stage, Arcelus most recently starred on Broadway in the stage adaptation of John Grisham's A Time To Kill. His additional Broadway credits include Elf, Jersey Boys, Wicked, Rent, and Good Vibrations. Off-Broadway credits include Happiness (Lincoln Center Theater), The Blue Flower (Second Stage), and Where's Charley? (Encores! at City Center). He has also appeared in numerous regional and international productions, including the world premiere of William Finn's Songs Of Innocence And Experience. His voice has also been heard over the years on many television commercials and animated programs.

Santino Fontana (performing February 21) starred most recently on Broadway as Michael Dorsey in the stage musical adaptation of the film Tootsie, for which he was awarded the 2019 Tony Award for Best Actor in a Musical. He was previously nominated for a Tony Award for his starring role as Prince Topher in Rodgers & Hammerstein's Cinderella on Broadway. Fontana originated the role of Tony in the Broadway production of Billy Elliot and was awarded the 2010 Drama Desk Award for Best Featured Actor in a Play for his work in the revival of Brighton Beach Memoirs. He has also appeared on Broadway in the revivals of Sunday in the Park with George, The Importance of Being Earnest, Hello, Dolly!, Moss Hart's Act One and in the Encores series productions of 1776 and Kurt Vonnegut's God Bless You Mr. Rosewater. He provided the voice of Prince Hans in the Walt Disney Animation Studios film Frozen and the sequel Frozen 2, and starred on television in the CW romantic musical comedy-drama Crazy Ex-Girlfriend as well as appearances in Fosse/Verdon, Mozart in the Jungle, Shades of Blue and Submissions Only among other television and film appearances. In 2005, as a member of the Essentials, Fontana co-wrote the musical comedy Perfect Harmony and originated the role of Philip Fellowes V. In 2006, he starred as Hamlet in The Guthrie Theatre's production of the Shakespearean classic, before moving to New York City to star as Matt in the Off-Broadway revival of The Fantasticks. He is married to actress Jessica Hershberg.

Seth Rudetsky is the afternoon host on Sirius/XM Satellite Radio's On Broadway as well as the host of Seth Speaks on Sirius/XM Stars. As an author, he penned My Awesome/Awful Popularity Plan and the sequel The Rise And Fall Of A Theater Geek (Random House) as well as three volumes of Seth's Broadway Diary featuring inside scoop and hilarious stories from all of the stars he's worked with. He co-wrote and co-starred in Disaster! (NY TIMES "critics pick") which also premiered to rave reviews in London. In June 2016, he and his husband, James Wesley, co-produced a recording of "What The World Needs Now" with stars like Idina Menzel, Lin-Manuel Miranda, Carole King, Audra McDonald which went to number one on iTunes and raised more than $100,000 for the Orlando shooting victims (and is still raising money. Buy it!). Seth and James have a foundation called Your Kids Our Kids that presented Concert For America; a series around the country featuring stars like Barry Manilow, Keala Settle, Stephanie Mills, Vanessa Williams, Billy Porter, Randy Rainbow and Audra McDonald that raised money for 5 non-profits that have been working relentlessly since the 2016 presidential election. They also present Voices for The Voiceless, a yearly star-studded concert for You Gotta Believe which helps older foster children find families, even if they've aged out of the system. SiriusXM/Pandora recently launched Seth's first podcast series: Seth Rudetsky's Back To School where he interviews stars about the ups and (hilarious) downs of their high school years. The first season includes Tina Fey, Allison Janney and Sean Hayes. When Broadway shut down, Seth and James started hosting / producing Stars In The House (StarsInTheHouse.com) ...a twice-daily livestream that's featured tons of Broadway stars as well as TV reunions like "Melrose Place", "Taxi" and "Frasier" and has raised more than $644,000 for The Actors Fund. You can find out more about Seth, and watch his signature "deconstructions", at SethRudetsky.com

Mark Cortale (Producer) most recently formed the developmental theatre lab NEW WORKS PROVINCETOWN and just commissioned a new musical entitled The Last Diva by Scott Frankel and Michael Korie with a book by Jonathan Tolins. He co-produced the critically acclaimed new Off-Broadway musical Midnight At The Never Get at The York Theatre in 2018, which received 3 Lucille Lortel Award nominations including Best Musical and 2 Drama Desk Nominations including Best Score. He produced Deconstructing Patti on Broadway at the Nederlander Theatre with Broadway Cares/Equity Fights AIDS starring Patti LuPone and Seth Rudetsky. He created the Broadway@ concert series in 2011 at The Art House in Provincetown where he serves as Producing Artistic Director. The series also premiered in 2013 in New Orleans, in Australia (Sydney & Melbourne) with Megan Mullally and in London's West End with Patti LuPone at the Leicester Square Theater. The series has since travelled to cities that include Chicago @ The Steppenwolf, Beverly Hills @ The Wallis, Fort Lauderdale @ The Parker Playhouse, San Francisco @ The Herbst Theater and Scottsdale @ Scottsdale Center for the Arts. In the 2018/19 the series launched in Boston @ the Huntington Theatre with Chita Rivera and at The Town Hall in New York City with six-time Tony Award winner Audra McDonald. Mark has produced international drag sensation Varla Jean Merman for the past twenty years and also produces the singing string quartet Well-Strung, which he founded. Info at markcortalepresents.com.

The Seth Concert Series is sponsored by BroadwayWorld and StreamYard.

All tickets available at thesethconcertseries.com 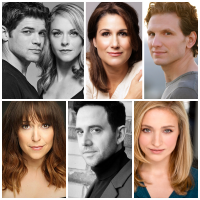