Board cites operational experience, stakeholder engagement, and passion for student success as determining factors for selection

"It was an easy selection," said Kristy Downs, CVCHS Board Chairperson. "After an exhaustive search and interview process, the Board was convinced that Jim was the best candidate. His pursuit for achieving ambitious goals has earned him respect and praise among his professional peers. He is viewed as a great organizational leader and strong collaborator committed to building positive relationships with all stakeholders through effective communications. But overall, the Board was impressed with his passion for student success and the enthusiasm he will bring to lead our staff and school community."

Scheible has over fourteen years of experience as a dynamic classroom teacher and seasoned school administrator. After graduating from the University of California, San Diego in 2004, he began his career as a Science and Math teacher in PS 28 in New York City. In 2007, he moved to California where he was hired by St. HOPE Public Schools in Sacramento as a lead teacher and quickly advanced to an administrative role. Under his leadership, St. HOPE Public Schools has consistently increased academic results for underserved students and provided a high-quality, rigorous college preparatory education. In his first year as principal, St. HOPE Public Schools was recognized by the California Charter School Association (CCSA) as the "Charter School of the Year" in the state.

He has vast experience developing school budgets and creating reserves at the organizational level while ensuring stakeholders – families, staff and community members – are part of the process. Scheible has led long-term planning efforts for academic excellence and professional staff development. He led the charter renewal process for St. HOPE Public Schools' K-8 and 9-12 schools in 2012 and 2016. Most recently, he led the successful WASC reaccreditation process for the high school and worked collaboratively with the authorizer's oversight coordinator to streamline the annual performance audit process.

Scheible is also a leader in the public charter school community. He currently sits on the CCSA's Member Council. In this role, he has participated in creating CCSA's Academic Accountability framework which establishes clear and transparent academic performance expectations for charter schools in the state. 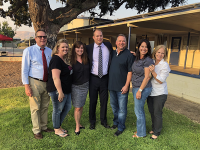